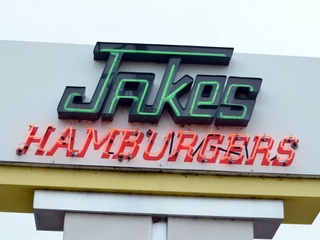 The Addison branch of Jakes Hamburgers, at 5500 Belt Line Rd. on the border of Dallas, shut down on June 15. A staffer said the location was closing for good, due to lease issues.

"The lease was up, and we couldn't find another place to move," she said. "We might open another location in the area, but that wouldn't be until at least next year."

The branch opened there about seven years ago in what was previously a California Pizza Kitchen. In the '80s, it was a bar called the Golden Parachute.

Jakes' signature item is a sloppy burger with the usual fast-food "PLOT" — pickles, lettuce, onion, tomato — on a poppyseed bun. Its other signature is a vexing missing apostrophe; shouldn't it be Jake's?

The chain was a precursor to "better burger" trend that emerged in the past few years, with an onslaught of chains such as Liberty Burger, Hopdoddy Burger Bar, Beck's Prime and Grub Burger Bar. The category has already begun to fade, with industry watchers observing a decline that began in 2013.

Unlike some of the newer burger chains, Jakes relies on the employ of young female servers wearing tank tops and short shorts, sort of like a junior-varsity Twin Peaks.

The closure leaves four Jakes around Dallas, two in Fort Worth and one in Grapevine. But Northern-residing Jakes fans may be reassured by a forecast from the Jakes staffer who said that the company had plans for future stores, possibly in Collin County and Las Colinas.