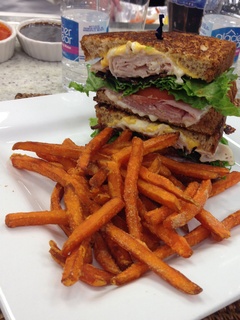 Out with the sports bar and in with Lantern St. Grill & Tap House, a new restaurant-bar going into the space previously occupied by Plano's 1st and 10, at Coit Road and Spring Creek Parkway. Lantern St. owner Aaron Morrison took over the dingy old space, cleaned it up and made it nice.

He scrubbed the kitchen, rebuilt the cruddy bathrooms, installed handsome hardwood floors, added a pretty stone backsplash to the bar and rustic wood slats on the wall. The place has been transformed into a casual, comfortable neighborhood pub.

Aaron Morrison almost opened Lantern St. in Frisco but saw potential for a neighborhood spot at this Plano intersection.

Morrison is an entrepreneurial sort who has owned or managed a number of places, including Glass Cactus at the Gaylord Resort, where he did all the training for the convention center staff. That's where he discovered he had a special skill.

"I discovered I had a flair for bottle-flipping," he says. "It was just something I did when I first started bartending, but I kept practicing until I eventually got to the point where I realized I was actually really good at it.

"I almost moved out to Vegas to do it full-time but decided I'd rather own a place rather than be bartending in my 30s."

He almost opened Lantern St. in Frisco but saw potential for a neighborhood spot at this Plano intersection. That's when he and his chef, Anthony Sergilia, got to work on the food.

He has a full menu with burgers, club sandwiches, chili, Caesar salad, and fish and chips. There's a noodle bowl that Morrison describes as "ramen on steroids." Instead of the usual chicken and waffles, they do fried chicken and bacon wrapped in a pancake.

He also felt compelled to create a signature dish.

"Every restaurant has a signature dish," he says. "Ours is the batter-fried mushrooms. I practiced once a week to get the right flavor. I'd call over friends. The batter is thin, but I got them so that they were soft and juicy, as if they'd been sautéed.

"We make our ranch dressing dip fresh, not from a bottle. Two of my friends said they hated mushrooms, and both said mine were so good, they would order them at a restaurant."