The Happiest Hours
Where to drink in Dallas now: 10 best happy hours to kick off fall 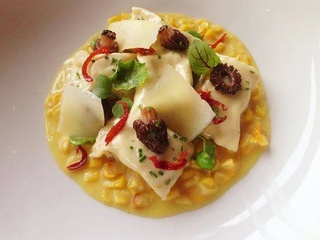 Greenville Avenue perennial favorite The Grape has a new chef de cuisine: Sarah Snow, who will work with chef-owner Brian Luscher. Snow fills the clogs left by Danyele McPherson, who departed in March to work with Elias Pope on his new soda-shop concept called Remedy.

Snow has been executive chef at Common Table; her last day is August 30. She previously worked with chef Andre Natera at Toko V, Village Kitchen, Marquee Grill, and the Pyramid Restaurant at the Fairmont Dallas hotel.

"I'm known for my hand-made pastas, and I know that will surface on the menu," Sarah Snow says.

She enjoyed her tenure at the Common Table but says she missed the fine-dining milieu.

"Common Table had been looking for a new chef and hoped to liven things up," she says. "The menu had been the same since it opened, so we made it more fun and appealing. But my passion has always been more in the realm of fine dining, with more finesse and attention to detail."

In addition to her tenure with Natera, she also worked at the Rosewood Mansion on Turtle Creek and Bijoux. She's also a fan of Luscher's. "It's always been a dream of mine to work with Brian, back to the days when I was in school at the University of North Texas," she says.

As chef de cuisine, she'll execute The Grape's signature dishes, like the award-winning Sunday brunch burger and the mushroom soup, but she'll also roll out some nightly specials with one of her favorite food groups: pasta.

She and Luscher are in the process of devising a new menu for the fall.

"I'm known for my pasta, particularly hand-made pastas, and I know that will surface on the menu," she says. "Andre always called me the Pasta Queen."