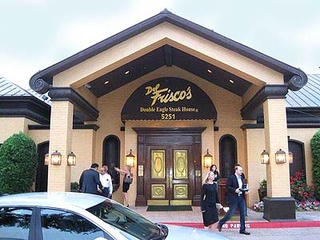 Del Frisco's will stay open in North Dallas until the Uptown branch opens in 2016. Photo via Hunch.com

Del Frisco's Restaurant Group has some changes in store: Its flagship steakhouse is on the move, and the company is opening another Dallas-Fort Worth branch of its more casual grill concept.

After 20 years, Del Frisco's Double Eagle Steak House will relocate from its North Dallas address to McKinney & Olive, a new development in Uptown Dallas. According to a release from Crescent Real Estate Equities, the steakhouse will be located at the main entrance on McKinney Avenue and will feature a two-story design with huge glass windows and a balcony overlooking a 1-acre park.

The move is targeted for 2016; until that time, the steakhouse will remain open at its current location on Spring Valley Road.

The new branch will feature views of Uptown and downtown Dallas, as well as a dining experience enhanced by McKinney & Olive's piazza and gathering space filled with umbrella-covered tables, park benches and water features. The park and surrounding grounds will be designed by landscape architect Jim Burnett of Klyde Warren Park fame.

"The move from North Dallas to Uptown for the Double Eagle is all about evolving the brand and showcasing more options and modern amenities while still sticking to the concept's rich heritage and tradition," said Del Frisco's Restaurant Group CEO Mark S. Mednansky.

Designed by Pelli Clarke Pelli Architects, McKinney & Olive is a 20-story office tower located on a 3.1-acre site near the Rosewood Crescent Hotel and Ritz-Carlton, Dallas. Crescent Real Estate Equities will announce other restaurants and a coffee hub at a later date.

Meanwhile, another branch of Del Frisco's Grille will open in Plano, at the Shops at Legacy district, in summer 2015. It will take over the space at 7200 Bishop Rd. that was once occupied by D'Hierro Furniture, which has been vacant for some time.

The first Del Frisco's Grille opened in December 2011 on McKinney Avenue, offering creative twists on classic comfort food and shareable dishes such as cheesesteak egg rolls and tuna tacos. Since then, 15 locations have opened around the country, from Santa Monica Pier to Rockefeller Center in New York.

The Del Frisco's Grille in Plano will be the fourth in the North Texas market, joining Uptown, Southlake and Fort Worth.