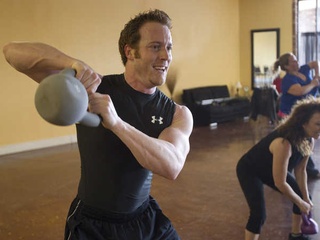 Gene Wallis taught Kettle Bell classes with Michele Williams while she was out on bond for murder. Photo courtesy of Get Kettle Bell Fit

Michele Williams has been in police custody since January 30, when it was revealed she was not pregnant with twins. Photo courtesy of Keller Police Department

In yet another unexpected twist in the case of Michele Williams, a married couple who took fitness classes from her is offering to help post her bond. Arthur Williams (no relation) testified that he and his wife are willing put $25,000 on their credit card to spring her from jail.

"I can't imagine her doing what she's accused of doing," Arthur said on the stand during a May 28 bond hearing. "I'm treating her like I'd like to be treated."

Michele Williams is accused of murdering her husband, Greg; cleaning the crime scene with bleach; and staging a home invasion. She is awaiting trial in September. Her bond was previously set at $520,000, but the Tarrant County district attorney filed a May 14 motion to increase the amount amid fears she'd skip town if released.

"I can't imagine her doing what she's accused of doing," said Arthur Williams (no relation) during the bond hearing. "I'm treating her like I'd like to be treated."

Like Michele's last bond hearing, the one on May 28 occurred off the books, with no public notice in Judge George Gallagher's court. The case was previously assigned to Judge Scott Wisch, who recused himself in February after Michele withdrew her guilty plea to deadly conduct and tampering with evidence.

Wisch was one of several witnesses who testified during the bond hearing and expressed doubts about the authenticity of Michele's medical records related to an alleged high-risk pregnancy with twins.

Wisch said he initially thought the documents Michele produced as evidence of her pregnancy "looked legit," but he started to question her story when she requested permission to travel to Galveston when she should have been about eight months pregnant. While out on bond and supposedly pregnant, Michele used multiple fake names; worked at a strip club; and taught Kettle Bell fitness classes with her boyfriend and the alleged father, Gene Wallis.

The Fort Worth Star-Telegram featured Shelley and Gene's kettle bell classes in a video just three months after Michele’s indictment for murder. No connection between accused murderer Michele Williams and fitness instructor “Shelley” was made at the time, though after CultureMap reported on the situation, the video was republished to reflect this fact.

"Let me offer you a hypothetical," assistant district attorney Jack Strickland said. "She was not pregnant. These documents were phonied up to delay sentencing." Michele's representation that she was in the midst of high-risk pregnancy influenced the DA's decision to offer her a plea deal and delay her punishment for six months so she could give birth and care for the children outside of prison.

"That would cause me grave concern," Wisch said, adding such behavior could potentially result in criminal charges for fraud. Michele purports that she had a late-term miscarriage of the twins. No evidence the medical event exists, and the timeline is under heavy scrutiny.

Some witnesses testified that Michele told them she had a miscarriage while in police custody on January 30, but the jail has no record of this occurring. The court remanded her to jail on that date because her attorneys represented that she'd lost the babies during Christmas and remaining pregnant was a condition of her bond.

Wallis said he never went to a doctor appointment with Michele, and she emailed him a sonogram showing twins. "She generally had her doctor appointments while I was working," Wallis said. In a previous bond hearing, it was reported that Michele's ankle monitor never showed GPS coordinates of a doctor's office.

While she was out on bond, Wisch denied Michele's request to travel to South Texas because it was "too far from Tarrant County and too close to the border with Mexico." But Gene Wallis testified that the couple took a trip to Matagorda Bay in Galveston during the Christmas holidays. Michele's GPS ankle monitor reported her location as being in a Tarrant County RV park, motionless, during the time of the alleged trip.

Lisa Hunt with the Tarrant County probation office testified that she believed it was likely that Michele had removed her ankle monitor and traveled to South Texas. A visibly nervous Wallis struggled to answer questions about whether or not he'd seen an ankle monitor on Michele during their vacation.

"I did not pay attention to her clothing," Wallis said initially, before changing his testimony to say that, yes, he had noticed Michele's ankle monitor. "Under my knowledge, there was nothing wrong with that situation. I trust her."

Arthur Williams said he doesn't think Michele would be a flight risk if let out on bond, and he believes Wallis would pay him back in full. Arthur said he recently inherited money when his father died and wants to put it to good use.

"We're not rich by any means, but it's just enough to do what we think is right for a friend," Arthur said. "I don't have that kind of money to lose or even to risk."

Typically, bail bondsmen require 10 percent of a bond as a collateral, meaning Michele would need at least $52,000 if her initial bail is reinstated, and even more if it is increased as requested by the district attorney's office. Judge Gallagher said he would issue a written ruling on Michele's bond in the next couple of days.

Gene Wallis taught Kettle Bell classes with Michele Williams while she was out on bond for murder. Photo courtesy of Get Kettle Bell Fit