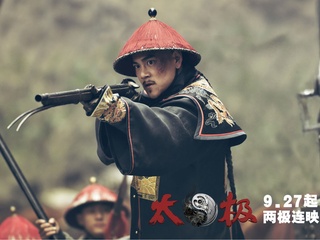 Set in China during the Qing Dynasty, Tai Chi Hero (playing at Magnolia Theatre April 13) is the second installment in the saga of Yang Lu Chan (Yuan Xiaochao), an outcast and village idiot who must fight against his reputation, his poor health and the encroaching influence of the Western world.

Born with a physical deformity that can only be cured by practicing ancient martial arts, Lu Chan studies under the guidance of Master Chen (Tony Leung Kar-fai) and ends up defending the village against an army of steampunk soldiers set on turning the sacred land into a railway station.

With the help of Master Chen’s daughter, Yuniang (Angelababy), Lu Chan must harmonize his mind and body in a series of battles that combine intense choreography and stunning visuals. The result is a smart and modern reinterpretation of the martial arts hero narrative.

Below, director Stephen Fung talks about Tai Chi Hero and his hope that it can “stretch the limit creativity.”

DIFF: Despite being an outcast in many ways, what is really motivating Yang Luchan to continue fighting?

Stephen Fung: The motivation for Luchan to keep fighting is his love for Yunan; now that he is part of the Chen family, it is up to him to clear the family’s name. Failure to achieve victory means death to the many villagers of Chen Village.

DIFF: Can you describe the nature of Master Chen and his followers? What is the reason for their success and ability?

SF: If I randomly ask someone for the definition of tai chi, I will get many different answers. To some it's martial arts, to some it's the balance of all living things, to some it's a kind of philosophy. To Master Chen, it is all the above and more. The peace and harmony of tai chi’s teachings somewhat goes against the rebellious nature that is innate in him; however, being the grandmaster, this attitude of his must be suppressed. So from time to time he allows this rebellious nature of his to seep through.

He likes to dress up as beggar and tries usually without success to blend into the crowd, he hates to attend his grandmaster duties and therefore he avoids them most of the time — that is until Luchan shows up. Master Chen saves him and takes him in as his disciple. This whole setup of the Master Chen’s personality is done deliberately to try to break away from the usual one dimensional “master” character that we see traditional kung fu movies.

SF: Tai Chi Zero and Hero are set in an altered history genre. Historically in this period of time, there were influences from the west in China; therefore it allows me some freedom to explore different genres. One that I emphasized heavily is the steampunk genre.

This genre is something that I’m fascinated by due to the incredible art work from artists and the whole idea of steam power being the dominating source of energy. I think this is the first time in film that we see this combination of steampunk and martial arts; I believe such a mix can be visually stunning.

DIFF: What do you hope films like Tai Chi Hero can provide to the kung fu action genre?

SF: We tried our best to try to break new grounds and hopefully were able to shed some new light onto the kung fu genre that has in recent years been creatively repetitive and stale. Whether this mixed breed of a kung fu film will be considered successful or not depends on whether audiences are susceptible to such new ideas. But for me as a filmmaker, I believe it is essential to stretch the limit in terms of creativity and keep moving forward.