From arresting to amazing
From body slams to tossed cookies, the 10 most unforgettable moments in Dallas theater 2012 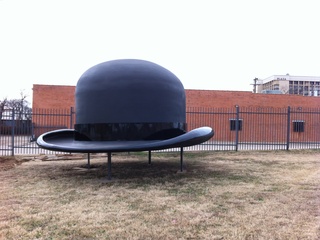 The bowler hat will soon be erected on top of a 20-foot steel column.  Photo courtesy of Nigel Brown 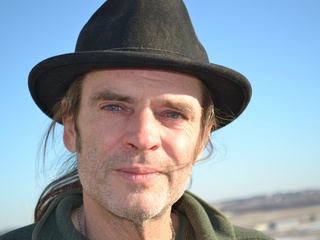 Artist Keith Turman says the bowler hat was the most challenging projects he's worked on.  Photo courtesy of Keith Turman 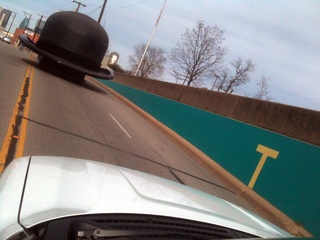 When fab British furniture giant Timothy Oulton commissioned artist Keith Turman to build a giant bowler hat for the flagship store at Central Expressway and Henderson Avenue, Turman could not have foreseen the challenges that lay ahead — or the final destination for his pride and joy.

“We started with a real bowler hat and sized it to 20 feet wide and 10 feet tall,” Turman says, who calls the project “his baby.” He says that it was his toughest project ever — more than a 7-story saxophone he worked on with Bob “Daddy-O” Wade, in Houston.

Surprisingly, the most difficult part was not working with two tons of steel, wood and fiberglass. It was that pesky brim.

The hat will be erected on a steel column in the next couple of weeks. From 30 feet high, it will cast a shadow that “will be perfect to have lunch under,” says Albert Scherbarth, who worked on the project.

Turman and colleague Albert Scherbarth used a 3D scanner to get the exact proportions and size for the brim, which Turman says was the most physically demanding — and unpleasant — part of the process.

“We were laying on our backs on mechanic creepers, while spraying foam that would fall back on our faces. It was not a pleasant job.”

“Making [the hat] smooth at the end of the project was very challenging,” Scherbarth adds. “We went overboard with some ungodly amount of Bondo, primer and fiberglass.”

The team — which also included Nigel Brown, David Moynahan, Jeff Hogan and Turman’s wife Jaime — worked on the project for six months. Just when they thought it was near completion, they learned that the city wouldn’t allow the installation.

The neighborhood had approved the project, and Turman says it didn’t matter that Brown, the structural engineer, made sure the piece could handle 90 mph winds, because the city said they didn’t have permits for sculptures.

“So we hired a consulting company, and they said not to worry about the permits — that we’ll just get a zoning variant later, after it goes up,” Turman says.

But when a new management team came into Timothy Oulton, and they wanted to go through an official permit process, all hope was lost.

“Thousands of dollars have been spent to permit this thing, and it never happened,” Scherbarth says.

“It took up a big chunk of my life, and it was just sitting there in the warehouse,” Turman says. “I was disappointed we had this great piece, and no one could see it.”

That perspective changed when Doug Caudill, owner of the space where the hat was built, suggested the group give it to The Cedars neighborhood — an area dense with many successful artists and engineers.

The hat was moved to its new location off I-30 on December 30, and a steel column is currently being fabricated for it to sit on. The hat will be erected — tipped at the top — in the next couple of weeks. From 30 feet high, it will cast a shadow that Scherbarth says “will be perfect to have lunch under.”

Turman recently moved to Red Oak, Iowa, “to live off the land” on a sustainable farm. He is still working as an artist.

“I was glad to see they could work something out,” Turman says. “I love this piece. I wish it could have gone up before I left town, but now it’s going up, and I think it’ll be in a better place.”

The bowler hat will soon be erected on top of a 20-foot steel column.  Photo courtesy of Nigel Brown

Artist Keith Turman says the bowler hat was the most challenging projects he's worked on.  Photo courtesy of Keith Turman