The city of Frisco does not currently have an animal shelter.

Frisco is well known as one of the fastest-growing cities in not only Texas but also the U.S. - and yet still does not have an animal shelter.

But residents are working to change that, and one of the key steps will be to persuade the city to put a shelter up for a vote in Frisco’s upcoming bond election in May 2023.

First: They must persuade a city committee to nudge the idea on to Frisco's City Council.

That'll happen on November 14 at 5:30 pm when a proposal is presented to Frisco's Citizen Bond Committee, which reviews funding proposals for city projects.

It's been a hard-fought battle for animal advocates in Frisco such as grassroots group Frisco's Pet Project, who've diligently petitioned a reluctant city council since 2018 to adopt policies addressing the health, safety, and welfare of animals and pets in Frisco, including a municipal animal shelter. 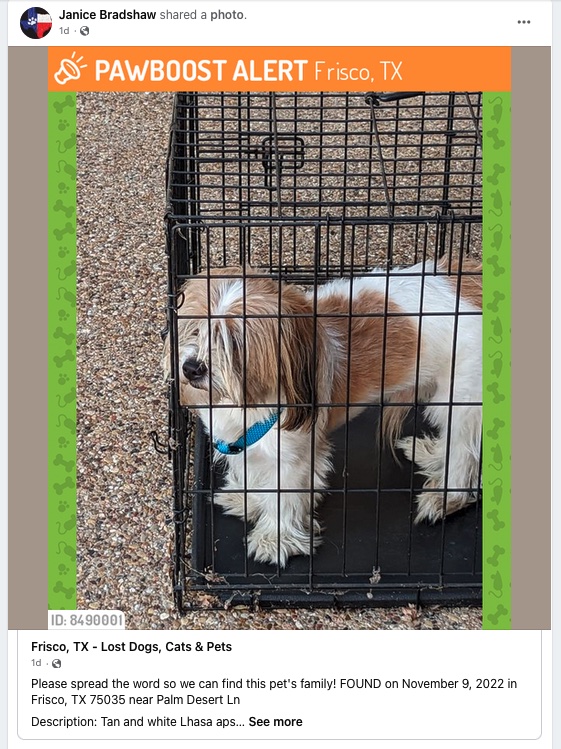 [Above, an example of one of the various grassroots groups that have formed to network lost and found pets in Frisco.]

"Frisco also lacks a temporary-holding space for animals found, forcing them to sit in the back of a truck while officers search for owners," Fields says.

Frisco residents have been left to personally rescue pets and try to find owners themselves, to avoid the drive to McKinney.

"There are more than five social media pages dedicated to reuniting pets with owners in an attempt to avoid adding to the shelter’s intake," Fields says. "Trying to find a lost pet or posting photos of pets you've found on all these various sites is nerve-wracking and distressing when you've lost a pet."

An animal shelter has benefits to the community that extend beyond serving as a place to house lost and found animals.

"The obvious benefit is to reunite more pets with their owners faster, get animals off the streets, and provide a safe place for lost and injured animals," Fields says. "But a shelter can also host community outreach programs, in-house workshops, including low-cost shots and spay & neuter clinics, micro-chipping, and especially volunteer opportunities, which the city itself calls 'the heart of a community'."

Of the 12 largest cities in Texas, Frisco is the only city without an animal shelter.

Frisco's Mayor and City Council have previously stated that an animal shelter could only be built if put on a bond.

"Whether you personally agree to the idea of having a shelter or not, I think it's only fair that an animal shelter be put on the ballot for residents to vote on in May," Fields says.

Dallas-Fort Worth jingles all the way to a top spot on new list of most festive U.S. places

Locura does Mexican-style street corn in many flavors.

A restaurant that's all about the elotes has opened in East Dallas: Called Locura, AKA Locura Small Bites, it's a woman-owned drive-thru spot whose signature is Mexican-style street corn, conveniently located just off I-30 at 3766 Samuell Blvd.

Locura is from Laura Carrizales and Mel Arizpe, who initially opened this elote-centric concept in West Dallas in the former Trompo space on Singleton Boulevard in 2020.

The restaurant did well until construction in the area started in 2021. A looming rent increase inspired them to relocate. In November, they moved into this new spot, a small stand across from Tenison Park.

The building is owned by DeLeon Provisions, a caterer who uses the kitchen during the day, while Locura operates from 4-9 pm.

Their menu is centered on elote cups in a variety of flavors:

In addition to elotes, they have a few unique menu items including pork belly bites served on purple cabbage with chimichurri sauce, and a pozole Frito pie featuring pork, hominy, Jack cheese, and Fritos.

For those who don't want to mess with a cob, they offer La Bamba, featuring fried corn, cut from the cob in long curly ribs, in a honey-butter chile.

They also rotate in limited-edition items such as their Mexican twist on a banh mi, or their tuetano (bone marrow) elote, a dish they encountered on a trip to Mexico City.

Carrizales is a Dallas native who's a graduate of El Centro's culinary program as well as TWU, where she earned a degree in food management. Arizpe is a Brownsville native who graduated from UNT with a degree in sociology. In addition to Locura, the two are also part of a karaoke duo called Mi Diva Loca.

They also serve a Concha French toast made using concha, the sweet Mexican bread which makes for an especially rich version of French toast, which is available on weekends only.

"We are still trying to figure out what we should offer given the diversity of the neighborhood, with Lakewood and Hispanic East Dallas," says Carrizales, who designed the menu. They're also considering expanding their hours to stay open later at night.

For now, they operate as a drive-thru place with a pick-up window and a small patio, where customers can wait for the food or grab a quick bite if they can't wait to get home.

Dallas-Fort Worth jingles all the way to a top spot on new list of most festive U.S. places