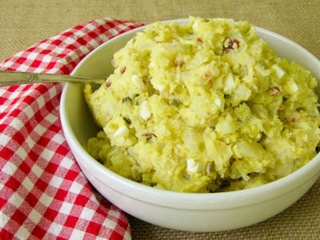 You'll never guess how much this potato salad costs. Photo via Kickstarter

Leighton enjoys an aerial view of Cleburne. Photo via Twitter

1. Please don't give this kid money for his potato salad Kickstarter. It seems everyone is getting in on the crowdfunding game these days. One kid's joke campaign for $10 to make his first potato salad has taken on a life of its own. That's a whole lot of potatoes, son.

2. Netlix is looking to pay someone to watch Netflix all day. Binge watching shows on Netflix is typically something unemployed people do, but one lucky lounger will actually clock hours on the couch. Netflix needs a new "tagger" to categorize shows and recommended similar programming.

3. North Dallas boy's good deed takes him to new heights. When 7-year-old Leighton decided to forgo new Legos so he could buy Gatorade and water for first responders in his hometown of Cleburne, he thought his only reward would be the satisfaction of a job well done. But the Cleburne Fire Department thanked him with a ride in a helicopter.

4. President Warren G. Harding's steamy love letters to go on display at the Library of Congress. President Harding was believed to be a rather boring commander in chief. But a recent treasure trove proves he carried on a passionate affair complete with secret codes and international hookups.

5. A hashtag guide to single men in America. A dating app called Lulu has released its most popular hashtags for men across the country. Dallas guys weren't all sunshine and roses, but at least they didn't earn the dubious distinction of being #PornEducated like New York men.

6. Cancer survivor runs from Florida to Maine in 68 days. Helene Neville isn't one for excuses. She's beaten cancer four times and is in the midst of 10,000-mile run of the lower 48 states. As if that weren't impressive enough, she's doing it all in an America-themed onesie.

You'll never guess how much this potato salad costs. Photo via Kickstarter