Read all about it
Neiman Marcus holiday crawl and hot coffee news: The 5 most popular stories this week

KNON 89.3 FM has been on the air for 30 years. Photo courtesy of Brian Humek

Rare is the day that all the KNON DJs gather at one time in all their multi-genred glory. Photo courtesy of KNON 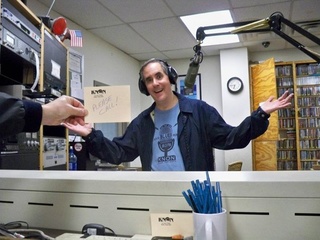 KNON DJ Scott behind the microphone. Photo courtesy of KNON

One day in the mid-1980s, as Dave Walkington was driving down Greenville Avenue, he flipped across some stations on the radio, heard The Clash — and freaked out.

Well, maybe not freaked out. But he was so astounded to hear something other than mainstream music on the radio, that he changed his life because of it.

KNON's motto is "The Voice of the People," and living proof of that is Walkington, who went from Clash listener on Greenville Avenue to "Dave Chaos," station general manager. At age 50, more than half his life has been spent in a career he'd never have considered if it hadn't been for KNON.

"We all share the same passions of a love of music and working here at the radio station," says KNON station manager Dave "Chaos" Walkington.

"I made a pledge during their pledge drive back then," he says. "Then one day I went down there and was introduced to the DJs. Then I started to volunteer with [current Rockabilly Revue show host] Charlie Park and started answering phones. I guess I hung around long enough, and they just gave me the keys."

Now celebrating its 30th anniversary, KNON is still run as somewhat of a bare-bones operation. The studio mixing board is a hand-me-down from KZPS 92.5 FM from the previous century. Volunteers donate their time and music collections. The station survives on pledges and small business sponsorships.

But the technology advancements have been dramatic. Remember records? Haha. Sorry, were those like big black CDs? If you listen carefully, to this day you just might hear vinyl on KNON.

In fact, DJ Ranger Rita, who plays oldies rock every Monday morning, claims on her Facebook page that "it has been mathematically proven that 1962 was the Last Good Year." For what, she doesn't say. But considering the capital letters, let’s assume it’s for everything.

Some DJs keep their playlists' hard drives, which will be laughed at in the next century. But those laughable drives serve as backup when the laughable laptop refuses to behave. And now that KNON is on Facebook, it gives us a glimpse of the private, inner-workings of a station that for decades only insiders got to see.

The other day, for example, a photo of this important studio announcement popped up: "No Food In The Studio INCLUDING DONUTS!" It set off a firestorm of panic.

"I always tell people, 'Don't touch that dial. We'll change the station for you,'" Walkington says.

"What about pork rinds and cheese whiz?" Charlie Park posted.

Actually, that was the end of the firestorm. But it did draw a sympathetic response from a guy in New Zealand a mere five minutes later. Who in 1983 would have thought people from the other side of the world could discuss radio station food policy in real time?

"Since we started streaming our broadcasts, we've definitely widened the audience," Walkington says. "We've got a couple thousand listeners a week from all over the world on the Internet."

Do the out-of-country folk contribute money to KNON? "Sometimes, yes," Walkington says. "They certainly could do more."

Walkington has a great, hearty laugh, which you hear after statements like that one. But running a radio station isn't cheap. KNON has a yearly operating budget of about $500,000. That’s down from a peak of about $650,000 before the recession hit.

"It's been really tough," he says. "We had to cut back on stuff, and we haven't fully recovered."

Reggae, for example, used to be played five days a week. Now it's down to three. But other formats — blues, country, rock, metal, gospel — have endured the decades.

A few of the 65 current DJs have been at the station since the beginning: Rev. Marion Barnett, who hosts a church open forum talk show every Saturday morning; blues guru Don O, a self-proclaimed "broke-assed college student" who donated money to KNON’s predecessor, KCHU; and Joyce Tolbert, who hosts the Early Sunday Gospel show at a very early 4 am.

The phoenix of radio
KNON rose from the ashes of community station KCHU 90.9 FM, which was funded by Lorenzo Milam and Dennis Gross and the Agape Broadcasting Foundation. It went on the air on August 28, 1975, and the format was insane. They had a bagpipe show, the first gay programming on Dallas radio, a big band show, reggae, poetry, and more.

But by August 1977, KCHU was up to its eyeballs in debt and staff infighting. Station equipment and the tower were repossessed. Milam found himself $250,000 in debt.

On January 1, 1978 a new group formed under Agape and obtained the license from Milam. The station also changed the call letters to KNON. But for the next five years, it never went on the air. At one point the board of directors thought about abandoning everything, and other groups became interested in the 100,000-watt license just sitting there in static.

Eventually, FCC license challenges were filed, appeals were made and, in 1983, the FCC gave the owners an ultimatum: If they didn’t have the station running by July 31, KNON would have no more license.

Agape scrambled and started a fundraising campaign. They found some equipment from the 1960s that volunteers worked around the clock to repair and leased the upstairs at a house on 4415 San Jacinto St. in Dallas; the studio itself was actually in a closet. They applied for a broadcast test permit on July 29, 1983. The next day at 3:15 am, KNON 90.9 FM signed on the air.

One of the volunteers at the station back then, Joe Norvell, told the Dallas Times Herald in 1985:

It was the last week of July, and I took my vacation time from driving a bus to help work at the station. The temperature on the outside was about 105 degrees, and inside the house it was about 125. We worked very, very hard all week, but the equipment wouldn't work. It was just junk. Friday we worked straight through 22 hours, all night. We finally got on the air that morning.

After three decades and a move to new offices at 5353 Maple Ave., everyone still puts in a lot of effort, Walkington says. They get by with only four full-time staffers. "We have a lot of long days, a lot of hard work goes into everything, but we have a good group of people here, and we all share the same passions of a love of music and working here at the radio station," he says.

"You've got people here from all walks of the community, and they come in because they love what they do. They go on the air and they come in that two to four hours a week and it takes some effort — rain, snow, no matter what it is, you’ve got to be here. It’s a really serious commitment."

Walkington encourages people who've ever thought about being a DJ to send in ideas for a show.

"We like seeing what's going on in music, and if people have a proposal, we want to hear about it," he says. "It's great that we get them. Anyone can send it through our website, and then it goes to me and if we have an opening, we’ll look at it.

"I always tell people everywhere I go, 'Don't touch that dial. We'll change the station for you.'"

KNON celebrates its 30th anniversary at Poor David's Pub on August 9 at 7 pm. Performers include Bill Kirchen, The Cartwrights and Kristyn Harris. And just so your stomach isn't left out, there will be free BBQ. Sorry, did you just say, "free BBQ"? That’s right, stomach. You’re gonna get some free BBQ.

KNON 89.3 FM has been on the air for 30 years. Photo courtesy of Brian Humek

Rare is the day that all the KNON DJs gather at one time in all their multi-genred glory. Photo courtesy of KNON

KNON DJ Scott behind the microphone. Photo courtesy of KNON