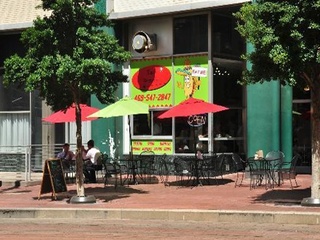 The downtown branch of Taco Borracho is right off the DART rail line. Photo courtesy of Trip Advisor

Downtown Dallas taqueria Taco Borracho is expanding its empire with the imminent opening of a second branch in Addison. Residents of the Addison Circle neighborhood are about to get all the late-night brisket tacos their hearts desire.

"It was a fine-dining Mexican place, and they were trying to charge $16 to $28 per plate," he says. "In that environment, I don't think that works. I feel confident about what we're doing. For one thing, we're setting it up where we do online ordering like a Domino's or Pizza Hut. There are 10,000 people who live within that community that we would love to deliver to."

The new Taco Borracho in Addison will keep late hours on Fridays and Saturdays and do full brunch on Sundays.

That includes all of Addison Circle, plus nearby townhouses and office buildings. He has a fleet of what he calls "hillbilly golf carts."

"I've got these golf carts that we can do deliveries with," he says. "But if people who walk in need a ride home, we'll drive them home for free."

He'll keep late hours on Friday and Saturday nights, and on Sunday he'll do a full brunch where he'll utilize the 1500-square-foot patio he's currently updating. He'll also expand the menu from his little stand in downtown Dallas, right off the DART rail line.

"I went to San Diego for two weeks at the beginning of the year and was inspired by all of the crazy things they do out there," he says. "We've been practicing doing things at this little store — enchiladas, chimichangas, some vegetarian dishes. This shop will be like an LA taco shop."

He first opened Taco Borracho in downtown Dallas in July 2010 on the ground floor of the Mosaic apartment building.

"I lived here in the building for four years, and it was a closet when I leased it," he says. "I blew out the walls and did everything. I've always had it on my mind to branch out."

That includes a third location in Uptown. But one store at a time. "Once we get the Addison store open, we'll be headed for McKinney Avenue," he says.