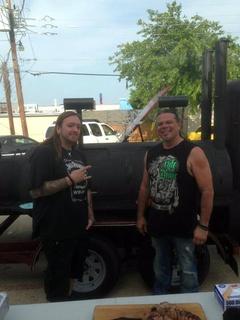 If you've ever attended a concert at Gexa Pavilion, Trees or other rock venues around town, you might recognize EZ Dude BBQ. This mobile barbecue stand can be spotted stationed outside clubs, serving up a menu of smoked brisket, chicken, burgers and rosemary potatoes.

But now owners Rob Eichelberger and Buster O'Keefe have found permanent digs in a most appropriate neighborhood: Deep Ellum. The duo will open EZ Dude BBQ at 2713 Elm St., in the storefront space next door to the Green Room.

O'Keefe is a longtime club guy and former owner of the Rail Club in Fort Worth. Eichelberger is president of Ride For Dime, the charitable organization honoring Pantera guitarist "Dimebag" Darrell Abbott.

Eichelberger dabbled in barbecue on the side with the occasional catering job. You'd know him if you see him: He's the one driving the white Hummer H2 with a 24-foot barbecue pit in tow and a welded statue of Dimebag.

"Since I had so many contacts in the music business, the catering kept getting bigger and bigger," Eichelberger says. "Any of your bands coming through, from Slayer to Mumford and Sons to Imagine Dragons, any rock act, I've probably cooked food for them."

"Reverse flow is good because it has no direct heat," he says. "I use oak wood because it burns hot but has an even smoke. I cook my brisket from 16 to 18 hours at 225 degrees. And I have my own 'black label' rub, from Black Label Society."

Wings are also a specialty, which he smokes, along with St. Louis style ribs, chicken quarters, hot dog, sausage and even a smoked hamburger. Sides include baked and pinto beans, roasted rosemary potatoes and baked cheesy potatoes. They've expanded what was once a small private kitchen, and are also expanding the bar.

"Chad Lee, who was Darren's personal photographer, emailed me and said, 'You need to make that bar bigger, so we have a place to sleep,'" Eichelberger says.

They're hoping to open by mid-April, and one cool touch they're adding that's especially appropriate is lining the walls with rock memorabilia, just like the Green Room used to do back in the day.

"Between the two of us, we have 30 guitars, autographed drum heads — there's even a couple of Ride For Dime slot machines," Eichelberger says.