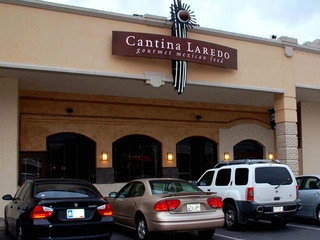 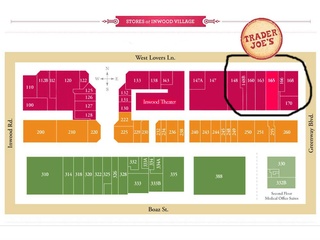 The section of Inwood Village that seems destined to become a Trader Joe's. Highlighted store is the Cantina Laredo.

Sad news for Tex-Mex fans: The Cantina Laredo at Inwood Village is closing Sunday, March 24. But good news for Trader Joe's fans: This longtime restaurant is shuttering to make room for a Trader Joe's store, which will open in 2014.

An employee at the restaurant said that some of the staff had been informed of the closure, and that they were sad. "We've been here for 10 years, and we love our customers," she said.

As for the disposition of Trader Joe's, a company representative refused to comment, as per usual. But numerous sources at Inwood Village confirmed that TJ's would be moving in.

Bag and Baggage, which was located in the storefront next to Cantina Laredo, moved out January 30; a staffer at the Galleria Dallas outlet said the Inwood Village location moved because the space had been leased by Trader Joe's.

At Susan Saffron Jewelry, also next-door to Cantina Laredo, an employee said they hadn't been given official notice but that they'd be moving to another storefront within Inwood Village. Turtletique, located on the corner two doors down, closed last fall; at that time, there was unconfirmed speculation that TJ's might be the reason.

Trader Joe's locations confirmed so far include the store on Lower Greenville, opening possibly in June, and two more branches in Dallas: at Knox-Henderson and at Walnut Hill and US-75, slated to open later this year.

Inwood would bring the tally of Trader Joe's in Dallas to four. The chain already has stores in Plano and Fort Worth. Four more places to get cookie butter!

The Cantina Laredo location has a long history as a restaurant, for more than 63 years. Prior to Cantina Laredo, it was the Mexican restaurant Casa Rosa. It started out as an El Chico in June 1949, when it was one of the original three tenants of the Inwood Village shopping center.

The closest Cantina Laredo is at Preston Road and Royal Lane. There are also branches in Lakewood, Addison, Lewisville, Grapevine and Frisco.