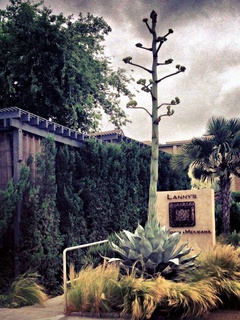 "For more than a few years, my heart has been pulling me in a different direction, and I am filled with excitement to follow this path," Lancarte says in a statement. "The dining scene in Fort Worth is experiencing unprecedented expansion, and I have listened to what I am hearing. The biggest itch that needs a scratching is a place to eat that is delicious but also happens to be good for you."

For nearly 10 years, Lanny's has been Cowtown's gastronomic temple. It was the only fine-dining restaurant from Fort Worth to make CultureMap's list of the 10 best restaurants in DFW. Lancarte, whose great grandfather is Fort Worth Tex-Mex legend Joe T. Garcia, attended the CIA and trained with Rick Bayless and Diana Kennedy. At Lanny's, he was ahead on trends such as sous vide, liquid nitrogen and vegetarianism.

Lancarte says the reboot reflects changes in his own life. He's gotten into physical activities, including bike riding and tri-athalons.

"Lately I'm eating more healthy foods," he says. "That's something I've been increasingly focused on in the past few years. I'd prepare natural foods for myself, not loaded with sugar –  whole natural foods that have more healing qualities.

"When we first opened, our emphasis was on Mexican ingredients, but our menu has moved more in that direction in the past few years, toward whole grains and more vegetables more than the proteins. That's been my style."

Lancarte's personal shift matches an evolution in the Dallas-Fort Worth area, which has seen the arrival of "healthy" chains such as Seasons 52, LYFE Kitchen and True Food Kitchen, as well as an increasing number of vegan offerings at conventional restaurants.

He's still working out the details of the menu and eventual renovation of the space, but he says the general concept will be breakfast, lunch and dinner "with healthy cuisine in the spotlight but not in your face. It'll still be made by the same people, the same cooks, but it'll be more approachable, with a more casual atmosphere and not just the special occasion events that we see a lot of now."

During the transition time, Lancarte will still do catering with the Alta Cocina menu, but the restaurant itself will close on June 28.