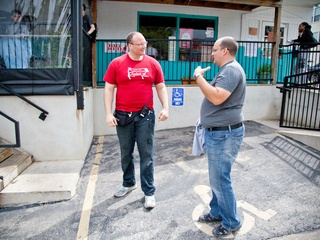 Daniel Vaughn and Anthony Bourdain dig in to some meat at Franklin BBQ for No Reservations. Photo courtesy of Daniel Vaughn/Full Custom Gospel BBQ

If Texans didn't love Anthony Bourdain before, they sure do now, after Monday night's premiere episode of No Reservations, which featured All Things Austin.

As forecast, Bourdain visited Barley Swine, Franklin BBQ, JMueller BBQ, Contigo, Quality Seafood, Draughthouse, Trudys, the Tamale House, Lala's and El Taco Rico. He got a tattoo from the guitarist of the Sleigh Bells, and he hung out with The Swords and Ume.

His most prevalent cohort was Daniel "BBQ Snob" Vaughn, author of the Full Custom Gospel BBQ blog and soon-to-be author of barbecue book Prophets of Smoked Meat, to be published under Bourdain's own Ecco imprint in summer 2013.

The episode begins at Barley Swine, where Bourdain and the members of Ume eat a multicourse meal that includes chicken testicles. ("Kinda rubbery," Ume bassist Eric Larson says uncertainly.) From there, it's on to Franklin BBQ, where Bourdain gets in line with Vaughn, who proclaims Central Texas to have the highest concentration of great barbecue.

​​ "To be honest, I was more concerned about how my brisket was going to turn out [at the watching party]," Vaughn says. "It was the best one I ever made."

"This comes as news to me, as I previously settled on North Carolina whole hog and Kansas City as my preferred final battleground for the barbecue arts," Bourdain says in voiceover narration before the show cuts to a series of blurry, loving, porn-like shots of Aaron Franklin and closeups of brisket, while rock music pounds in the background.

Bourdain and Vaughn share a spread of brisket, ribs and sausage, with Vaughn offering a dry, authoritative dissertation on barbecue terminology: the "sugar cookie," the "smoke ring" and the "bark." There are about a dozen closeups of brisket, of fibers of meat being tugged from stretchy tendons. There is the obligatory "toast" between Bourdain and Vaughn, using pieces of meat. "Only Texans and Jews understand brisket," Bourdain says.

From there it's on to the tattoo; the whole pig roast and crawfish boil; the consumption of a mourning dove at Taco Rico; fish tacos with The Sword; breakfast at El Azteca with Alejandro Escovedo; and then a reunion with Vaughn at JMueller, where Vaughn notes the proprietor's nervous energy as he runs back and forth to the smoker. Bourdain calls the sides "terrific." Then adds, "But the beef short ribs? He owns that territory."

Vaughn says that he watched the episode at home with friends who've been supportive of his blog since its launch.

"I cooked a bunch of barbecue," he says. "I smoked a brisket all day. Some [of my friends] were there at the filming. We'd been in El Paso two days earlier, covering barbecue places for my book. So we stayed at a cheap ratty hotel outside SXSW. You can catch a few glimpses of them in line.

"After the show was over, they all clapped," he adds. "To be honest, I was more concerned about how my brisket was going to turn out. It was the best one I ever made."

While Vaughn's faith in Texas barbecue is unshakeable, he worried about how Bourdain would compare it to other regional offerings.

​ "Certainly I knew I wasn’t going to look like an idiot," Vaughn says. "[Bourdain] does have a vested interest in keeping my persona out there."

"It's well-documented that he thinks Oklahoma Joe's in Kansas City is one of the best places in the country, but my opinion is that Texas brisket is far superior," Vaughn says. "When I got the call to be on the show, I was like, hell yeah -- now he’s going to have a new favorite. In the show, he said that it was by far the best barbecue he ever had. And on his blog about the show, he said, straight up, the best barbecue in the country is in Austin. That was the part I was most proud about, coming from a guy who has gone around and tried a bunch of different barbecue."

Oddly, the fact that Bourdain will be publishing Vaughn's book never comes up in the episode.

"Certainly I knew I wasn’t going to look like an idiot," Vaughn says. "He does have a vested interest in keeping my persona out there."

As an architect in his day job, Vaughn likes things to be just so -- which is how he came to put a stunt double out of a job, to do those loving, slo-mo brisket shots.

"We'd just wrapped up shooting at Franklin, we'd had a few beers, everybody was happy, and the producer says, 'Hey, give me your shirt. I need to go in and do some meat closeups,'" Vaughan says. "So those poorly manicured nails? Those were his. When we were at John Mueller’s, he goes to scoot me over, and I said, 'I've been doing this for months for my photographer. Let me do it.' The meat closeups at JMueller were me. Afterward, the cameraman, Zach Zamboni, was joking. He said, 'Daniel is so much better at this.'"