Please drink in moderation
Beer, wine and tequila: It's a tippler's dream of food and booze events in Dallas this week

Dallas-Fort Worth loses Zombie's Food Truck, the only all-vegan wheels in the city

Dallas-Fort Worth loses Zombie's Food Truck, the only all-vegan wheels in the city 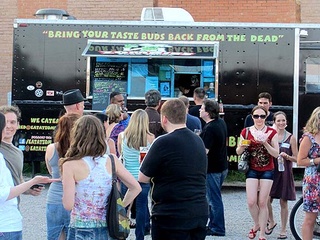 Uh-oh, another food truck is dead in the water. Despite a name suggesting otherwise, Zombie's Food Truck, a Fort Worth-based all-vegan food truck, was laid to rest this weekend. Owner Fred Hoang-Davis said that he just doesn't have time to keep it running.

"It's definitely not due to a lack of support," Hoang-Davis said in a message on Facebook. "We've felt very fortunate to have received support from our friends and family, awesome customers, other food truck owners, vegetarian organizations, and cities and municipalities in DFW."

Zombie's has been up and running since January. Its best-sellers included the buffalo Joe, a vegan riff on buffalo chicken with shredded carrot and blue "cheese" sauce, and the Seoul Survivor, consisting of grilled seitan with scallions, red onions and mushroom served on a bolillo roll with fresh basil and sriracha-ginger mayo.

The vegan part is not the problem, said owner Fred Hoang-Davis; it's the time commitment. He did not anticipate running a food truck would be a full-time job.

Vegans are not completely out of luck. Food truck Good Karma Kitchen specializes in vegetarian and gluten-free goods, many of which are also vegan. It's still in business.

The vegan part is not the problem, Hoang-Davis said; it's the time commitment. He did not anticipate running a food truck would be a full-time job.

"I started the truck as a side business," he said. "The whole time I was doing it, I've also worked a day job that I love, as well as help raise and home school my young children and support my wife as she takes on the challenge of nursing school. Between two full-time jobs and fulfilling my obligations to my family, there is just a finite amount of time."

Hoang-Davis said that he believes strongly in supporting the vegan community and is in talks to sell the truck to someone who will continue with Zombie.

"We will endeavor to sell the truck to other vegans who will help ensure there is not a void in great all-vegan food in the DFW food truck scene," he said.

Meanwhile, he wants to put together an e-cookbook of vegan recipes from the truck and beyond. The Zombie's Food Truck team will also continue to do catering, private chef service and vegan-friendly menu consultation for restaurants.

The crew has plans to rise again, this time with a home-based baked goods business selling vegan whoopie pies, brownies, muffins, cupcakes and cookies for northern Fort Worth and the Mid-Cities.