The Drinking Diaries
Primebar celebrates one year in Uptown with monkeys, fire and burlesque
LATEST NEWS
These are the 8 best food and drink events in Dallas this week
Getting crusty 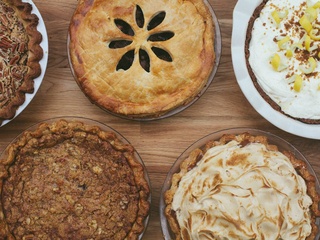 Emporium Pies, the specialty pie shop that opened in Oak Cliff September 1, gives us an always-appreciated reason to write about pumpkin with the imminent arrival of its seasonal pumpkin pie, coming to the shop October 1.

Emporium is the shop from partners Mary Gauntt and Megan Wilkes, who started in February with a pop-up concept before finding permanent digs at 314 N. Bishop Ave., in a 1930s building that used to be a house. They're making serious artisanal pies with no preservatives or hydrogenated oils, served in fine little boxes tied with string. You can buy whole pies or pies by the slice ($5), with a cup of joe made with Dallas' own Cultivar coffee.

The pumpkin is part of a program of pie flavors that change according to the season.

"We'll change our flavors every three months," Gaunt says. "Every quarter, we'll be changing about half our menu. We change with whatever fruits are in their natural season. Right now, as far as fruit goes, it's hard to find anything other than apples. Some staples we'll always have."

Those include bourbon pecan, French silk chocolate on a pretzel crust, deep-dish caramel apple with streusel on top, and buttermilk pie.

Gauntt says her recipe for pumpkin pie has a special spice blend.

"It's a gingersnap crust — like the concept of a graham cracker crust but using ground ginger snaps," she says. "The filling is a cooked pumpkin custard, but the spices are a little different than what you normally find in a pumpkin pie. They're still fall-ish but with a little more spice."

"The spice blend is the secret," she says. "I’ve always made and used a certain ratio of four different spices."

Ooooh, what could those be?

"It's cinnamon, nutmeg, ginger and clove — nothing too exotic, but it's the amount of each," she says.

Aww, no cardamom? Cardamom is an awesome spice.

"Cardamom will make a showing in our Christmas lineup," she says. "We have a buttermilk chai pie.

Emporium's current lineup of seasonal pies includes butterscotch meringue (the meringue is a dark brown sugar meringue, so it's different from the snow-white meringue you might envision); lemon chiffon in a gingersnap crust; and apple-cranberry, which will only be there for another few days, as it is about to be replaced by pumpkin. They'll also do daily specials, like the one they made recently for breakfast with a cheddar crust, chipotle aioli, bacon and a cracked egg on top.