Why actors Katherine Bourne and Mikaela Krantz want to be jailbait

Mikaela Krantz as Emmy during rehearsals for for the Texas premiere of Jailbait. Photo courtesy of Dallas Actors Lab 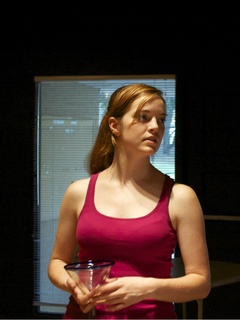 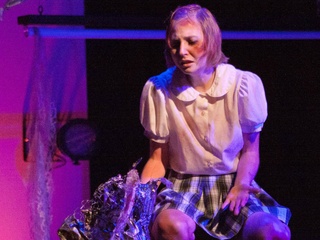 In Deirdre O'Connor's Jailbait, the audience follows the characters of Claire and Emmy as they go out to a club and meet Mark and Robert. The two men are in their 30s; Emmy and Claire are only 15. Playing these teenagers are Katherine Bourne and Mikaela Krantz, two Dallas transplants who have been turning in notable, nuanced performances all over the city.

Because Emmy and Claire are so inseparable, it only made sense to include both actresses in this month's Actor Spotlight. Before Dallas Actors Lab's Texas premiere of Jailbait opens August 22, Katherine and Mikaela took the time to fill out our survey of serious, fun and sometimes ridiculous questions.

Previous work in the DFW area:

Where you currently reside:

KB: Lakewood! East Dallas represent!
MK: Wherever I can find a couch ;-)

KB: Groucho Marx. It was in a second-grade production where some kids get trapped in a wax museum and the statues come back to life to explain their role in history.
MK: Ever? The experimental program I was a part of in grade school (in Minnesota) had us learning through all sorts of creative mediums. This included doing plays where I was a blue whale or a ghost or a penguin looking for where she belonged. Professionally? Designated guitarist and ensemble member for both The Taming of the Shrew and Troilus & Cressida at the Hudson Valley Shakespeare Festival in New York.

First stage show you ever saw:

KB: Stellaluna at Seattle Children’s Theatre
MK: I have no idea. The first shows I saw were shows that I was also involved with at school, which was first, second and third grade. It was less of a foreign event that I had to travel outside of my little world to see, and more of an element within the very atmosphere I breathed. Theater was something that was always part of my schema of the world.

Moment you decided to pursue a career in theater:

KB: No idea! I know I wasn’t surprised when it clicked, and I don’t think anyone else was either, honestly.
MK: I suppose I could refer you to the previous answer. However I was also a singer, and senior year of high school was when I made the big decision to go to university for theater performance instead of music.

KB: Probably this one. I didn’t realize the way I’ve “moved on” from 15 until I started playing a 15-year-old — and, on the flipside, the ways I have definitely stayed in that place.
MK: Oooh, there have been many challenges and each for a wide range of reasons. A long time ago I played Beth in A Lie of the Mind. That was my first opportunity to step inside a character who carried very severe physical and psychological trauma within her body. As a first of many, it was extremely daunting.

Something you’re REALLY bad at:

KB: Once I feel awkward, I can’t get out of it, which leads to lots of bad jokes and creepy smiling.
MK: Being concise when I am called upon to do so. Also: elaborating before it is angrily demanded of me.

KB: Thrifting, Marvel, Comic Con and Spotify
MK: I'm not so obsessed that I can't wait for it to be posted online, but I love Food Network Star. I'm a huge Alton Brown fan, because when I first saw Good Eats, I couldn't understand how he was able to retain an audience, because all his jokes failed. But in his failure was so much humor that he endeared himself to me very quickly.

KB: A Farewell to Arms
MK: Last good one was Blindsight by Peter Watts. I hold my authors to high standards.

KB: Capote, Waiting for Guffman, O Brother Where Art Thou, Almost Famous
MK: I don't often watch movies more than once, but one of the only movies I use as a go-to is The Fifth Element.

KB: Chris Rice, Kodaline, Sam Cooke, Boyz II Men
MK: My alter ego is Amanda Palmer. (And she ended up marrying one of my favorite authors, Neil Gaiman! Huzzah!) I am really into lyrics, and I think she brilliantly balances quippy wit and soulful depth, while adding just a dash of goofy absurdity to round out her whole music cocktail.

KB: “These Foolish Things” (the Sam Cooke cover)
MK: I go through favorites very quickly and can often fall into long periods of abstaining from listening to music all together. I leave my radio on NPR for those times. One song that has resonated very strongly within me, and still does to this day, is “We Exchanged Words” by Azure Ray.

KB: Anyone in a Checkhov play. I’ll even play the maid or the old man.
MK: I was able to check one dream role off my list when Stolen Shakespeare cast me as Puck from Midsummer. However I am not done with him and would so love to play him/her/it again.

KB: A View From the Bridge, The Last Days of Judas Iscariot
MK: The Walworth Farce by Enda Walsh is trilled-R brilliant! I also enjoy George Bernard Shaw's plays, in particular Major Barbara, mainly because of his intellect. Mikaela the person is extremely cerebral, so she finds herself drawn to mind-stimulating plays. Mikaela the actor prefers plays like Gruesome Playground Injuries or a play called Fishtank, written and performed by the good people at Theatre de le June Lune, a theater in Minneapolis that, unfortunately, is no more. Fishtank didn't have a single line of dialogue, and the four actors on stage were all working within the world of the red-nosed clown. Funny, beautiful, heart-breaking. It will stay with me forever.

KB: Annie, hands down.
MK: I don't often go see musicals, and I really don't know many out there. I have never seen it, but from what I hear about it, I bet I would really enjoy Assassins and The Book of Mormon!

KB: Tom Hiddleston and Mikaela Krantz, of course!
MK: I really enjoy Noomi Rapace from Girl with the Dragon Tattoo (Swedish version) and Prometheus. Locally I fell in love with Emily Scott Banks when I watched her do a reading of a show at the Bath House, and since then I have gotten to see her and perform with her on stage. She is always a fascinating, present, specific, inviting actress.

KB: Pimento cheese and wine.
MK: Broccoli! I love it so much, I eat it all the time! I have to be gluten-free, because I have celiac, so much of what I eat are meats, veggies and fruits. But I can never have enough broccoli!

Something most people don’t know about you:

KB: When I was 11 I tried to pluck my eyebrows for the first time and failed miserably. I kept trying to even each side out until I had two half-eyebrows. When people asked I said they “burned off,” and I didn’t want to talk about it. Now everyone knows the truth!
MK: Way back when, I fooled a bunch of my high school friends into thinking they saw the theater ghost disappear in front of their eyes, when really it was me. After I "vanished," I quickly snuck around and walked up behind them just as they were talking about how much it looked like me, so when they saw me coming up to meet them, they flipped their sh--opping carts because that obviously meant it was a ghost, and not me at all that they had seen. That was a really stupid run-on sentence. I apologize for that stupid run-on sentence.

Place in the world you’d most like to visit:

KB: New Zealand
MK: Iceland! No, Russia! (My brother is in Russia.) No, Japan! Some place with epic landscapes. OUTER SPACE!

KB: Just relaxing and releasing my spine.
MK: I sing the whole Boba Fett rap (Fett's Vette) as my diction exercise every show. I'll do random vocal warm-ups mainly because Mikaela in real life doesn't talk much. Hardly at all, really. I guess you can't tell by this questionnaire.

Favorite part about your current role:

KB: The empathy and vulnerability required to play her.
MK: Finally getting a chance to be the rebellious, irresponsible, carefree teenager who wants to drink and get in trouble and hasn't a clue what she wants to be when she grows up. I could never be an Emmy when I was that age.

Most challenging part about your current role:

KB: Same thing. Vulnerability is scary!
MK: Not falling into the humor of the dialogue. It's a funny script, but I don't want that to outshine the gravity of the experiences these characters — and my character in particular, for me anyway — are going through.

KB: Being unable to find my exit in the blackout before intermission and having the lights go up on me still feeling around for a doorknob.
MK: I was playing a spunky little boy, and as I was running off the stage, my foot got caught in the back wall curtain, causing me to slide about four feet across the stage on my side, the curtain dragging behind me. I got up with barely a scrape and laughed along with everyone else. It was the first time I realized, “Hey, it's actually kind of fun to fall flat on your face.” And it set me up for being able to try different things a lot more and therefore to fail a lot more through my acting education.

Career you’d have if you weren’t a performer:

KB: Teacher
MK: Probably a Lexicographer. I love words and the ambiguity of the English language! It's my favorite playground! Or perhaps I'd work more diligently on becoming a public intellectual, a career that is quickly dying out. We lost another great one when we lost Christopher Hitchens.

KB: Lakewood Landing or the Belmont
MK: ... My bed?

Favorite thing about Dallas-Forth Worth:

KB: Oral Fixation at the MAC, the theater community, and the food.
MK: I have befriended certain people here who have influenced my life in a profound way. For that I am grateful.

KB: In Dividing the Estate at Dallas Theater Center, I came onstage as sort of the deus ex machina at the very end, and the wall of energy that hit me when I walked onstage first preview was pretty overwhelming.
MK: While playing Simon in Lord of the Flies, I have a monologue where I stumble upon the pig skull, and I believe it is actually talking to me. This happens in the book, but in the play the pig reminds him of a past male teacher making fun of him.

Because we were doing an all-female version, it made more sense to me if this previous male teacher had sexually abused Simon. Almost every night, without fail, I would get laughter from the audience when I first spoke as the pig, moving it in my hand like a puppet. But the laughter quickly became awkward and uncomfortable, finally dropping away to a profound silence when I began reliving the sexual abuse.

My body would try to escape from the pig skull/my predator (which at this point was between my legs) while being “involuntarily” pulled back toward the pig skull. The lights would go out, and I'd clear the stage in the blackout. But the energy of the audience always felt like a cat spooked by its own shadow. It was disturbing and heartbreaking for all parties involved.

Mikaela Krantz as Emmy during rehearsals for for the Texas premiere of Jailbait. Photo courtesy of Dallas Actors Lab