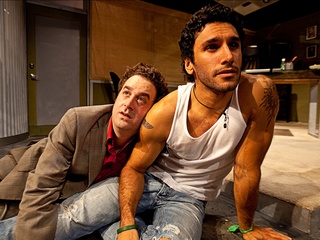 Jihad Jones and the Kalashnikov Babes at KDT. Photo by Matt Mrozek

The movie that started it all. Photo via RogerEbert.com

Michael Federico has spent his years in Dallas making a name for himself not only onstage, but also off. A company member at Kitchen Dog Theater, Federico also wrote the book for the local musical that took the city by storm, On the Eve. The time-traveling show won accolades from critics and audiences alike as it played first at Fair Park’s Magnolia Lounge, and later as part of the 2014 season at Theatre Three.

Now Federico returns home to KDT in The Arsonists. A new translation by Alistair Beaton of Max Frisch’s 1953 play, The Arsonists is an absurdly funny parable about accommodating the very thing that will destroy you. Original music by Jon Schweikhard rounds out the experience, which runs November 7 through December 13 at McKinney Avenue Contemporary.

Federico recently took the time to fill out our survey of serious, fun and sometimes ridiculous questions.

Role in The Arsonists: Eisenring

Previous work in the DFW area: Mike in Barbecue Apocalypse (KDT), Ralph D in The Motherfucker with the Hat (KDT), Leo in Profanity (Undermain), Andrew in Becky Shaw (KDT), Konstantin in The Seagull (KDT), Ariel in The Pillowman (KDT)

Hometown: I was born in Philadelphia, but I grew up in Plano.

Where you currently reside: East Dallas

First stage show you ever saw: Annie at the Dallas Summer Musicals or Something’s Afoot at Creed Repertory Theatre. I can’t remember which one was first.

Moment you decided to pursue a career in theater: I owe my theatrical career to the Tom Hanks/Meg Ryan classic Joe Versus the Volcano. During my eighth grade year, I was deciding whether or not to take theater in high school. I went to see that movie, and during the scene in which Hanks is dancing on a raft made of luggage while “Come and Go with Me” plays, I was like, “I’m going to take theater in high school, and I’m going to be an actor.” Always a good idea to make major life decisions at 14.

Most challenging role you’ve played: Konstantin in The Seagull

Something you’re REALLY bad at: Cooking

Last book you read: If on a winter’s night a traveler by Italo Calvino

Favorite movie(s): Back to the Future

Favorite play(s): Travesties by Tom Stoppard, A Midsummer Night’s Dream, The Seagull, The Threepenny Opera, Cloud Nine by Caryl Churchill, On the Verge by Eric Overmyer

Favorite musical(s): Into the Woods, Assassins, Hedwig and the Angry Inch, Little Shop of Horrors

Something most people don’t know about you: I am terrified of crocodiles.

Place in the world you’d most like to visit: Iceland

Pre-show warm-up: I usually drink a 32-ounce Coke, listen to show-related music and then do the Kitchen Dog group warm-up.

Favorite part about your current role: It’s fun to play someone who is amoral.

Most challenging part about your current role: I think Eisenring is always a few steps ahead of everyone else, so trying to keep up with the crazy jumps in his thought process can be a challenge.

Most embarrassing onstage mishap: Opening night of Charm at Kitchen Dog, a prop that plays a huge part in the end of the show got stuck in a weird pocket-within-a-pocket of my pants and I couldn’t get it out. I tried for what felt like three hours. The playwright was in the house.

Finally, I just grabbed another random prop that was in my other pocket. Luckily, I was on stage with John Flores and Jeffrey Schmidt and they totally went with it, changed the scene on the fly, and somehow made it work.

Career you’d have if you weren’t in theater: I’d like to say superstar point guard for the Dallas Mavericks, but I’ll go with English professor.

Favorite thing about Dallas-Fort Worth: Most of my favorite people live here. And the Mavs.

Most memorable theater moment: Opening night of On the Eve at the Magnolia Lounge.

Jihad Jones and the Kalashnikov Babes at KDT. Photo by Matt Mrozek