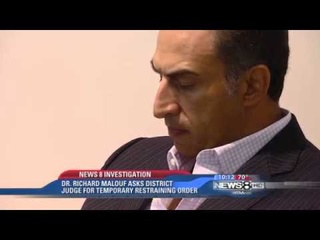 The Maloufs have posted a "No Trespassing" sign at their Strait Lane home.  Candysdirt.com

Waterpark-building dentist Richard Malouf has added a half dozen more defendants to his privacy lawsuit, stemming from media coverage of construction at his family's Strait Lane mansion. WFAA reporters Brett Shipp and Jason Trahan have been served, along with Jason's wife, Marina L. Trahan; attorney James "Rusty" Tucker; and Sarah Firshein, editor of Curbed.com, which is also named separately as a defendant.

Tucker is a private attorney who specializes in medical malpractice, among other areas. He did not immediately respond to a request for comment on why he would be included in this suit. Shipp and Trahan also could not be reached for comment, and Firshein declined to make a statement on the pending litigation against Curbed.com.

Apparently, the media conspiracy against the Maloufs has stretched nationwide and now includes New York-based Curbed.com.

In October 2012, Richard and Leanne Malouf sued real estate reporter Candy Evans, Belo Corporation, Channel 8 WFAA and reporter Byron Harris, and Laura Wilson, who happens to live next door to the would-be waterpark. The Maloufs alleged then that all parties had conspired to trespass on their property; invade their privacy; and defame, libel and slander the couple.

Evans is bearing the brunt of the blame for her work on CandysDirt.com and with WFAA. The Maloufs accuse Evans of working closely with Wilson to gain access to their home. Wilson, a renowned photographer, lives on Strait Lane with her husband, Bob. They are the parents of Hollywood heartthrobs Andrew, Luke and Owen Wilson.

"It's hard to tell where Candy Evans stops and WFAA starts," Richard Malouf testified during a pre-trial hearing in December. "They are all conspirators in this."

Apparently, the conspiracy is growing wider and now includes New York-based Curbed.com, which once dared to link to a WFAA story on the waterpark.

Richard Malouf is no stranger to legal drama. He's been charged with Medicaid fraud for his work at All Smiles Dental, and he's facing lawsuits from the Texas Attorney General and private attorneys under the False Claims Act.

WFAA won a 2013 Edward R. Murrow Award for its investigation of Texas Medicaid fraud, including the allegation that Malouf used taxpayer money to build his personal waterpark. Texas law generally prohibits the seizure of one's home, even in the event of wrongdoing, but there is a loophole.

The Maloufs' jury trial against a host of media professionals for trespassing, invasion of privacy and defamation is slated to begin September 16, 2013, in Judge Sally Montgomery's court.

Stop along the Texas Plains Trail Region for stunning vistas and fascinating history
Strike it rich with Kilgore's nostalgic charm and heaps of history
From baseball games to outer space, here are Midland's must-dos