Michele Williams' son testifies about plot to frame another woman 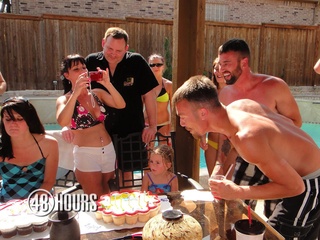 Michele and Greg with family at their Keller home. Photo courtesy of 48 Hours

Accused murderer Michele Williams wiped away tears as photos of her husband’s dead body were shown in court during the first day of her Tarrant County trial. Michele, 45, is charged with murder and tampering with evidence in the 2011 shooting death of Greg Williams.

Prosecutors ran through a handful of witnesses after opening statements. Michele’s son, Andrew O’Brien, was stoic as he testified that his mother asked him to frame another woman for Greg’s murder.

Andrew said that Michele asked him and his brother to help clean up the remains of Greg’s body from the couple’s Keller home. At one point, Michele pulled Andrew aside and asked him “to do something for her.”

“She asked me to call some friends and have them frame Kathy,” Andrew said. “I was in shock.”

According to Andrew, Michele gave him specific instructions to carry out, including buying an “extra large sweatshirt” and wearing it while he fired a pistol so that it would have gun power residue on it.

Then, she wanted someone to break into Kathy’s car in an inconspicuous way and plant the sweatshirt inside. Finally, Andrew was supposed to call 911 and tip them off to Kathy’s involvement.

“She was very calm when she asked me to do it,” Andrew said.

Although he never went through with the plot to frame Kathy, Andrew admitted he waited several months before telling the district attorney’s office about his mother’s wishes. “When you are asked that question by your own mother, it is really hard to know what to do,” the 26-year-old said.

After a week with no action from Andrew, Michele told him not to bother. “She told me since I wasn’t getting it taken care of, she was going to figure it out on her own,” he said.

In January 2013, Andrew finally reported his mother’s plot to the authorities.

“At that point, I felt as though Michele was going to put the blame on my brother,” Andrew said, adding that his brother, Lee O’Brien, had recently gotten into an argument with Michele.

“The next day, she asked me if I thought it was possible that Lee was the intruder [that killed Greg]. We had heard so many stories … that first year after Greg died was such a blur.”

Andrew said that Michele’s stories included variations on a home invasion and suicide. In at least one version of events, Michele told Andy that Greg had hit her in the face the night of the murder and given her a black eye.

That’s the same theory prosecution floated in its opening statement. Michele now maintains that she hit herself in the face with a wrench to support the intruder theory.

At one point, Andrew said Michele asked him and Lee to take turns guarding the house because she was worried that someone would try to kill her.

“It was a roller coaster of emotions. Some days she’d be crying hard. Other days, she’d be laughing.”