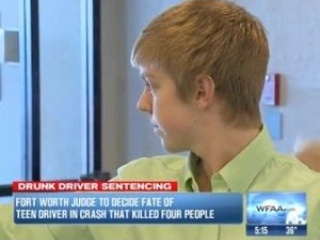 Ethan Couch, 16, was sentenced to 10 years' probation for his role in a drunk-driving accident that killed four people. Photo courtesy of MamasLatinas

A North Texas teen who controversially avoided jail time after a drunk driving accident that killed four people could still end up behind bars on related charges.

Tarrant County District Attorney Joe Shannon said in a statement that his office is pursing jail time for two intoxication assault charges for which Ethan Couch, 16, has already pled guilty.

Judge Jean Boyd sentenced Couch to 10 years probation on December 10 for causing the Burleson wreck that left four people dead and two others severely injured. Couch elected to have Boyd sentence him rather than face a jury trial.

The teen faced up to 20 years in jail but landed on the lightest side of the punishment scale — probation. Couch will not be released to his parents and instead will be placed at Newport Academy, a small facility in California at a cost of $450,000 per year, which Couch's parents will pay. The average treatment term at the academy is 60 to 90 days, though Couch is expected to remain there for much longer.

Clinical psychologist G. Dick Miller testified that Couch suffered from "affluenza," a condition that apparently causes wealthy kids to believe their actions have no consequences. Miller advocated for probation and an intensive, long-term treatment facility. In an interview with Anderson Cooper, Miller defended his controversial opinion that rich kids who commit crimes should be treated differently than poor kids.

"I'm not  interested in how much punishment he gets. I'm interested in taking away things that are important to him and replacing them with things that are in his best interest," Miller said. "I trust that judge... I do believe that if you have a lot of money you get people with more skills ... that's just the way the world works."

At Newport Academy, Couch will undergo equine therapy and have access to the gyms, beach and other recreation activities.

Couch had two prior alcohol citations for driving 89 mph in a 40 mph zone, to which he pleaded no contest in March. His mother paid $423 in court costs, and Couch was supposed to take an alcohol awareness class and do 12 hours of community service.

Eric Boyles, whose wife and daughter were killed, stated that he thought Couch stayed out of jail because his family was rich. Columbia University professor Patricia J. Williams told Al Jazeera that "it makes a mockery of equality and equal standing before the law."