Vanity Affair
Bring on the heat: The Hair Bar, another no-cut salon, will open December 17
LATEST NEWS
U.S. health agency gives the OK to take masks off if you're vaccinated
Let Me Sum Up

"I'm sorry. Were you talking to me? I'm a little busy rocking these boots right now." 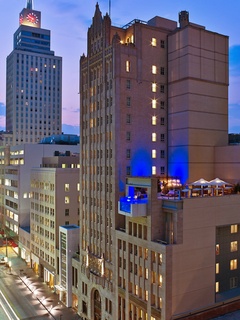 Headington Co. has developed a swath of downtown, including the Joule Dallas. Photo by Eric Laignel

It’s hard to find good news for the Friday 5, the news stories that are intriguing me most as we head into the weekend. I scoured for nothing but feel-good items, looking for tales of Santas and sugar plums and school executives who make less than $200,000. Alas, I found little.

1. Buildings are getting built
Steve Brown at the Dallas Morning News has a couple of items that I found intriguing. This one suggested that tear-downs in East Dallas and the Park Cities were on the rise. Not, you know, back to the insane levels of 2006, when we actually worried about old homes being scraped to make way for new ones, but enough so that we’re happy to see such economic activity.

I do fancy the quote at story’s end, though, explaining that these aren’t the McMansions of old: “The days of people buying huge houses with space they don’t need and have to heat and cool are over.” Well that’s good to know.

2. Developments are being developed
The second item was this Brown blog post saying that Headington Co. — which has developed a swath of Main Street, including the Joule Dallas — has purchased those ass-ugly blocks of parking lots between the West End and Arts District.

Yesterday, for fun, I started writing down all the best burgeoning areas of town, and most are in or around downtown. A great bridging mixed-use development there would be another huge step in that trend. BTW: If you’re playing the development drinking game, the CEO did use the term “game changer” in the story. Do a shot.

3. Performance-for-pay plans coming to DISD
DISD school board president Lew Blackburn said yesterday that he has nothing but support for all top DISD brass to take pay cuts and be forced to earn back the money by meeting performance objectives.

Liar! I don’t support it! Me! Who’s got two thumbs, speaks limited French, doesn’t support the plan and hasn’t cried once today? This moi!

4. Who will get all the Twinkies?
Bloomberg is reporting (and I saw via the Dallas Business Journal) that the suitors for assets of Hostess continue to circle the company like some sort of dorsal-finned, tortured metaphor in the water. These shark-life companies include Wal-Mart and Kroger.

Now, I have a question: If Wal-Mart is loved by the free-market right wing, and they ultimately devour what remains of this company, then wasn’t the Hostess bankruptcy ultimately good for America? I’m asking Fox News, specifically.

5. Bill Clinton’s kick-ass boots
I wasn’t really sure which national feel-good story to shoehorn in here and try to make it seem local. At first, I was going to do the CALM act going into effect today. That’s the law that keeps commercials at the same volume as the show you’re watching. I know! Awesome, right?

Here’s a great story on how tough this was to make happen, because of all the technology and math and such involved. But then I decided I just wanted to point you to The Atlantic to see this picture of Bill Clinton in UT boots, because it and Clinton are just so bad ass it’s not even really fair.

"I'm sorry. Were you talking to me? I'm a little busy rocking these boots right now."