American hero
Neil Armstrong, first man to walk on the moon, is dead at 82
LATEST NEWS
From bluebonnets to polka, celebrate big in festival-friendly Ennis
Riding the rails

Full speed ahead: 2020 set as target date for 205 MPH bullet train between Dallas and Houston

Full speed ahead: 2020 set as target date for 205 MPH bullet train between Dallas and Houston 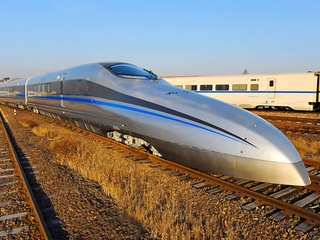 The route between Dallas-Fort Worth and Houston is expected to take 90 minutes — or less — by bullet train.  Inhabitat.com

The 250-mile trip between Dallas-Fort Worth and Houston made in 90 minutes or less? Texas Central High-Speed Railway leaders say it's possible, without public financing and within the next eight years.

And they exuded confidence about it at a high-speed rail forum in Irving on Tuesday, reports the Associated Press.

"We are not the traditional state-run railroad," said Robert Eckels, president of Texas Central High-Speed Railway and former Harris County judge. "This is designed to be a profitable high-speed rail system that will serve the people of these two great cities and in between and, ultimately, the whole state of Texas."

Tracks would go over, under or around car and pedestrian traffic to take advantage of the bullet trains' 205-mile-per-hour capabilities.

If this all sounds familiar, that's because it is: Talks of the quick trans-Texas trip have been underway since 2010, when Central Japan Railway Company (JR Central) rallied for part of an $8 billion federal grant that President Barack Obama set aside for high-speed rail corridors.

That effort failed, but JR Central has teamed up with the Texas-based company to raise roughly $10 billion in private dollars for the DFW-to-Houston route. Eckels believes federal involvement slows the process and piles on expenses and claimed that private money would be repaid by riders' fares, which would be "competitive and, in many cases, less than airfares."

Tracks would go over, under or around car and pedestrian traffic to take advantage of the bullet train's 205-mile-per-hour capabilities and would stop in College Station — and perhaps a few other locations between North Texas and Houston — for minimal interruptions.

Although no timeline has been announced for phase one, Eckels said that a second phase of the project would link Austin and San Antonio to the system along the I-35 corridor.

The Cedars: Stunning skyline views and good eats just south of downtown Dallas
Midway Hollow: A blend of home styles with a strong sense of community
Colleyville: A peaceful area that's close to all things fun