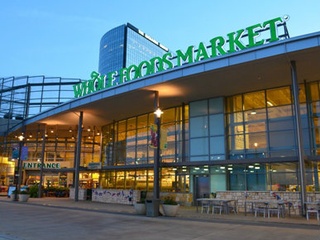 The store's address is 2500 McKinney Ave., at the corner of Routh Street. According to a release, it will be the only grocer located in a vertically integrated, mixed-use development.

In plain English, that means that the store will be part of a complex that also includes residents and an underground parking lot. Imagine coming home from the office, dropping off your work stuff, taking the elevator downstairs and walking into the biggest refrigerator a guy or gal ever had. (Imagine also having to pay for what's in the fridge.)

The store is 38,000 square feet and will have a unique design and product selection specific to the neighborhood and community.

The store is at the base of Gables McKinney Ave, which is a seven-story building that includes 222 apartments and a building behind it with 17 townhomes. The location is on the McKinney Avenue Trolley line, although given the trolley's chug-a-lug 20 mph, buying ice cream is probably not advisable.

Whole Foods has had this store in the works since 2012. Uptown is becoming the new breeding ground for supermarkets, with a Tom Thumb planned for Union Dallas, an office, residential and retail project at Field Street and Cedar Springs Road near Victory Park. A Kroger opened at CityPlace in 2012, and a Trader Joe's is opening near Knox.

According to the Dallas Morning News, Gables has had a waiting list for this apartment complex since September 2014. Rents begin at $1,690 for a studio apartment. But, hey, residents save money on gas because they won't have to drive to the store.