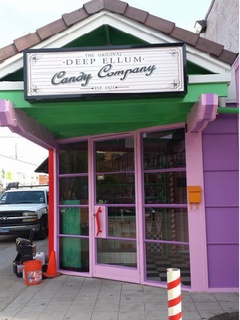 A bar hidden behind a candy-store facade is opening in Deep Ellum at 2618 Elm St., the space vacated by barbecue restaurant Work in April. Called Truth & Alibi — which, not coincidentally, can be abbreviated to T&A — it's fashioned after a Prohibition-era speakeasy, for customers who don't want to frequent Deep Ellum's more typically funky pub or live music-style venues.

The entry is an elaborately designed, glass-enclosed, fake candy store, with rows of gum balls and a little mushroom table. A door on the right leads into the main bar, where Work used to not-sell barbecue by Doug Pickering.

The folks behind the place include Mark Beardon, Chris Beardon, Shea Comer, a motley crew with ties to Le Vu, Sisu Uptown, The Dram and The Globe, a rental space on Riverfront Drive.

Chris and his twin brother Mark have renovated the space into a slick and sophisticated bar that requires patrons to know a password before getting inside. T&A will offer "hand-crafted" cocktails (as opposed to the ones assembled by robots), along with "sexy, mouthwatering small bites" made from "fresh, local ingredients."

A menu has not been posted yet, but Chris says the food will be shared plates and appetizers that work with a happy hour crowd, and that should be coming in a few weeks.

"The owners decided to change things up and do a different concept," Chris says. "It's very exciting since this is a concept I've been wanting to do for quite a long time."

The space has a medieval-meets-modern decor, with black sofas and white leatherette benches, which were sourced from Venetian Society in Los Angeles.   The password will be posted on the club's Facebook page.

"Once a week, we'll change the password for the weekend," he says. "We want it to be more of a word-of-mouth thing. We won't turn people away, but we want it to be a little bit exclusive."

Briarwood: The Lovers and Inwood neighborhood that's close to everything
Preston Hollow: Where to find some of Dallas' best architectural gems
Zero-lot-line homes in Dallas: Everything you ever needed to know