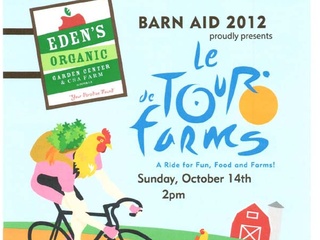 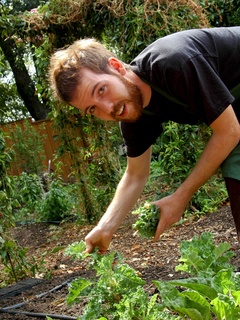 Mark Wootton of Garden Cafe will cook with the ingredients that riders collect on their tour of community gardens and local farms.  Photo courtesy of Mark Wootton

When Marie Tedei started Barn Aid four years ago, it was literally to aid her barn. A tornado had ripped off the roof of the structure, and the insurance company wasn’t paying. Tedei threw together a free concert and dinner to raise funds so that her farm, Eden’s Organic Garden Center in Balch Springs, would have a barn worth using.

Then the insurance company came through. So Tedei took the money she had raised and gave it to neighbors who had suffered damage in the storm.

From there, an idea sprouted: an annual event to promote organic and sustainable food production while helping out the community.

For this year’s Barn Aid, participants will embark on a 32-mile bike ride that will end at Eden’s for a three-course meal prepared by local chefs.

For this year’s Barn Aid on October 14, Tedei has an ambitious plan. In what she believes is Dallas’ first “Le Tour de Farms,” participants will meet at the Lake Highlands Community Garden for a 32-mile bike ride that will end at Eden’s for a three-course meal prepared by local chefs Graham Dodds of Central 214, Mark Wootton of Garden Cafe and Chad Houser of Cafe Momentum.

“The ride isn’t a race,” Tedei says. “Everyone will ride together, and it should take around three hours.”

Along the ride, participants will stop at community gardens and local farms, including Promise of Peace Community Garden, Stonewall Jackson’s school garden and Paul Quinn College’s We Over Me farm. At each stop, riders will pick out the ingredients for that evening’s meal, ensuring the freshest, most organic food possible.

“We’re going to have a list of what’s available and needed from each stop,” Tedei says. “It’ll be like a scavenger hunt. That way we won’t end up with five pounds of okra and nothing else.”

If you’re not confident in your biking abilities, there’s also a driving route, so you can follow along (with two additional stops).

Tedei says the purpose of Barn Aid is to teach people about growing their own food and creating a sustainable environment.

The event benefits the gardening program at the Youth Village Resources of Dallas, an organization that helps juvenile offenders rebuild their lives and become successful young adults. When she was looking for a beneficiary, Tedei says the Youth Village just made sense.

“The foods they grow in the garden go into [the Youth Village] cafeteria and the pop-up kitchens for Cafe Momentum,” Tedei says. “There’s something about getting your hands in the dirt and the responsibility of making a plant live that can give these young men a way to make careers as farmers or cooks.”

Tedei says that grades and attitudes have gone up since the garden was implemented at the Youth Village. “They don’t really have very much over there,” she says. “But I believe in these boys and want to impact their lives so that they can break the cycle.”

For anyone interested in Barn Aid who can’t make the ride or dinner, there will be a free screening of Urban Roots, a movie about urban renewal in Detroit through community gardening, and a concert by Lorynn the Redhead, who has played at the past two Barn Aids.

“We’re going to have some concessions, like organic popcorn,” she says. “But anyone coming should definitely bring a blanket or some chairs.”

Overall, Tedei says the purpose of Barn Aid — which she hopes will only get bigger — is to teach people about growing their own food and creating a sustainable environment.

“It’s a lost connection that’s making a comeback,” she says. “I grew up as far away from a farm as possible in Chicago. I just want to promote the smaller grass-roots movements around here and help these boys.”