By Jennifer Chininis
Oct 4, 2012, 10:00 am
Rusty Taco is a participating vendor in the North Texas Taco Festival in April 2013. Rusty Taco 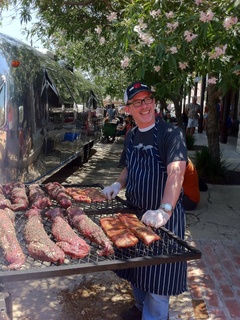 Media darling Brian C. Luscher of The Grape will compete in the Iron Chef-style competition for best taco. The Grape/Facebook

If you’ve looked at Facebook or Twitter today (and of course you have), then you know it’s National Taco Day — yet another meaningless holiday that gives social media marketers (and, yes, the media) a reason to talk about something and/or solicit photos from adoring fans.

So, in our in-box this morning was a note from Taco Trail’s José Ralat-Maldonado. He, along with Rich Vana of Entrée Dallas and the Deep Ellum Outdoor Market, is bringing a “proper taco festival” to Dallas in April 2013.

Brian C. Luscher of The Grape will go “tortilla to tortilla” with another local chef in an Iron Chef-style competition, to be judged by a panel of local writers (pick me!) and “discerning taco enthusiasts.”

As for Luscher, we’re pretty sure there isn’t anything that guy wouldn’t do for some ink. God bless him.

The North Texas Taco Festival will be held Saturday, April 20, 2013, 11 am–5 pm, on the 2800 block of Main Street between Malcolm X Boulevard and Crowdus Street.

Rusty Taco is a participating vendor in the North Texas Taco Festival in April 2013. Rusty Taco