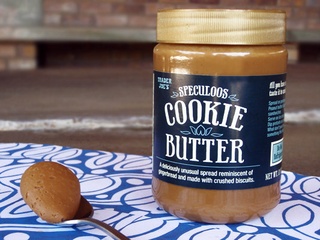 Trader Joe's No. 1 best seller was a spread made of ground-up cookies. Spread it on your cookies! Photo courtesy of Small Kitchen College

Trader Joe's has only recently arrived in Texas. T. Rudick

Trader Joe's has only recently opened in Texas, but one tradition that precedes the discount gourmet grocer's arrival is its annual listing of its most popular, best-selling products.

The list has changed over the years because TJ's product mix changes depending on availability and consumer tastes. In the restless foodie circle, what was new and cool five years ago is old hat today.

As a point of comparison, two years ago, the list still had dried cherries; in 2012, those things, while no less delicious, have faded into nowheresville. Conversely, who could have predicted two years ago that a spread made of ground-up cookies would be No. 1?

Most of these items are available at all Trader Joe's stores in Texas. Dallas has at least two openings slated for 2013, with the store at Walnut Hill Road and Central Expressway set to open first, followed by the much-awaited branch on Greenville Avenue and another coming later to Knox Street.

Trader Joe's No. 1 best seller was a spread made of ground-up cookies. Spread it on your cookies! Photo courtesy of Small Kitchen College

Trader Joe's has only recently arrived in Texas. T. Rudick

The French Streets: A little joie de vivre in Highland Park
The Fairway: University Park’s close-knit community where neighbors feel like family
Briarwood: The Lovers and Inwood neighborhood that's close to everything

Go on an artsy adventure in history-rich Mansfield
Feel the sand in your toes at beachy, beautiful South Padre Island
Dig into the history and food of Temple, where town meets country