This Really is a Baseball Town
Arlington hits it out of the park as top U.S. city for baseball
LATEST NEWS
Republic owners debut sleek dim sum and sushi restaurant in N. Dallas
Video Thrills 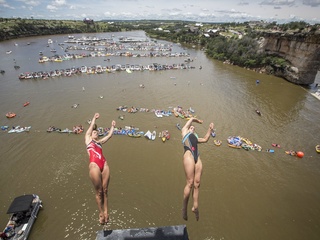 For the second consecutive year, Texas hosted the Red Bull Cliff Diving World Series at Possum Kingdom Lake, about 150 miles west of Dallas. Elite men and women divers competed for supremacy at the famous cliffs of Hell's Gate. This is the only U.S. stop and the third overall in the global competition.

Men dove from 90 feet above the water, while the women dove from a height of 65 feet, reaching speeds of up to 53 mph during their three-second free falls. San Antonio native Rachelle Simpson and the UK's Gary Hunt successfully defended their 2014 titles. The latter received two 10's from the judges and the highest-scoring three-second dive of the whole competition.

"Just to come back home and give them a good show, and with the weird, crazy start, I wasn't in my routine, but it felt good, and I just had so much fun," Simpson said.

On Saturday, following the competition, more than 2,000 floating spectators made it out to watch the thrills in a special showcase, featuring some highly technical dives. To see highlights — including a synchronized dive from the 92-foot platform — check out the video.