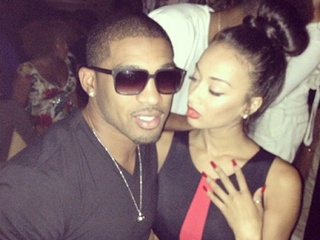 Orlando Scandrick says he unknowingly used Molly at a club in Mexico. Photo via talk-sports.net

The Cowboys official bus outside Bootsy Bellows on the Sunset Strip.

Injuries in pro sports are acceptable, even at the rate the Dallas Cowboys defense is absorbing them. But the self-inflicted wounds of the past few days are much harder to tolerate.

The latest is Orlando Scandrick’s four-game suspension for testing positive for a drug called “Molly,” a crystal form of MDMA used in Ecstasy.

Molly is considered an amphetamine, a Schedule 1 drug by the Drug Enforcement Administration; it is banned by the NFL. In fact, the NFL posted signs in locker rooms last year noting the banning of the drug, because it’s popular in clubs. Dallas Morning News writer Jon Machota tweeted a photo of the sign on August 12.

Amazingly, a player using Ecstasy might not be the most bizarre off-the-field issue the Cowboys have dealt with in the last week.

A club is where Scandrick says he ingested the drug while on a trip to Mexico with an ex-girlfriend earlier this year. Although it’s unclear who gave Scandrick the drug, it’s clear he did know the drug was in the drink he ingested on a Saturday.

He definitely wasn’t planning on the random drug screening the following Monday. He accepted full responsibility during a press conference on Tuesday and said he does not take Molly for performance enhancement.

“It was just a bad decision,” Scandrick said in a post-practice media conference. “I should have never done it. I didn’t do it with the intent of knowing that it would test positive. I know we get random tests but I mean, I don’t take anything to enhance my performance.”

The onus is on players to keep track of what they put in their bodies, even if they’re on vacation, as the collective bargaining agreement makes them subject to random drug tests year around. No one in Scandrick’s camp disputed that on Tuesday. He has no one to blame but himself. By any measure it was a poor decision.

The funny thing is this might not be the most bizarre off-the-field issue the Cowboys have dealt with in the last week.

On August 5, lewd photos of Cowboys owner and general manager Jerry Jones posing with two strippers surfaced online. One stripper posed with her head near Jones’ groin; the other posed with her back to Jones as he wrapped his arms around her chest. The photos were once purportedly intended to blackmail Jones.

Jones avoided the media for several days — which must have been like an addict going cold turkey — before finally emerging Sunday to call the photos a “misrepresentation.” He didn’t dispute that he was in the photos; he just said they were misrepresented — and little else. He did admit that he’s known about the photos for five years. No one is sure why they’re surfacing now.

Then there’s his son, Stephen Jones, who typically flies under the radar. Well, that’s hard to do when you take one of the Cowboys cruisers to a Sunset Strip nightclub, Bootsy Bellows, as he did last weekend. Stephen strolled into the club, picked up several women and then drove off into the Los Angeles night. There’s actually nothing wrong with blowing off some steam and going to a club. But how about taking a cab, Stephen?

Finally on Tuesday, it was on-field hijinks as the Cowboys and the Oakland Raiders got into a fight during a scrimmage in Oxnard. The fight spilled over near the gallery area, where a Raiders fan grabbed Cowboys cornerback B.W. Webb and took a swing at him. All because Morris Claiborne actually made a tackle.

One of the real criticisms of the Cowboys the past several years has been team discipline, both on and off the field. It’s something that head coach Jason Garrett has preached repeatedly during his tenure and attempted to instill in any way possible. But it’s an almost impossible task for Garrett when his team owner, his executive vice president, his best cornerback and his opponent’s own fans spent the past week putting on a clinic of how not to behave.

And just think – there’s another week left in training camp. I wonder if someone will up the ante before the party buses leave Southern California?

Orlando Scandrick says he unknowingly used Molly at a club in Mexico. Photo via talk-sports.net