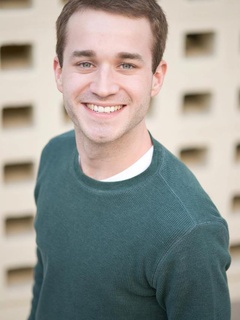 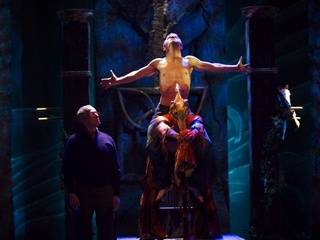 Swarner as the disturbed teenager Alan Strang in Equus at Uptown Players. Photo by Mike Morgan

In 2011, the DFW Critics Forum named Max Swarner one of Dallas' top male performers for his star turn in How to Succeed in Business Without Really Trying at ICT MainStage. Much like the character he played, Swarner is known for his effortless charm and nonstop ambition — though thankfully he doesn't also share J. Pierrepont Finch's penchant for trickery and narcissism.

One of those actors who seems to be everywhere (seriously, look at his resume), Swarner next appears as the confused seminary student Henrik in A Little Night Music at Pfamily Arts in Plano. He recently took the time to fill out our survey of serious, fun and sometimes ridiculous questions.

Previous work in the DFW area: I have literally grown up in this theater community. In recent years, I have worked for Theatre Three, Lyric Stage, Uptown Players, Shakespeare Dallas, ICT MainStage and Dallas Summer Musicals, to name a few.

Where you currently reside: Dallas, Texas. I’ve spent my whole life living in the Lakewood area.

First theater role: Winthrop Paroo in The Music Man. My old church produced this musical at the Kalita Humphreys Theater, and the minister of music really wanted me for the part. He talked to my parents about it before he talked to me.

My parents told me that I had an audition for the show, and, believe it or not, I got really upset with them! I did not want to go, and I let them know it. Somehow they coaxed me into giving it a shot at the audition, saying I would let them down if I didn’t show up. Of course I ended up having a blast, and I walked out with a script in my hands. I haven’t looked back since.

First stage show you ever saw: The Phantom of the Opera at the Bass Performance Hall in Fort Worth.

Moment you decided to pursue acting: Sitting in Bass Hall watching that performance of The Phantom of the Opera, I knew that I had to get involved in the theater. That show is still just as captivating to me as the first time I saw it.

Most challenging role you’ve played: Alan Strang in Equus for Uptown Players. At the time, I had mainly done musicals, and I was looking for a way to break out of that world and challenge myself.

Playing that extremely disturbed character forced me to overcome my own fears, and it allowed people to see me in a completely new way (literally and figuratively). Equus was truly a life-changing experience, and I am a better person today because of everyone involved in that production, both onstage and off.

Special skills: When I was growing up and trying to find what I loved to do, I played several sports: basketball, baseball, and soccer. I still love to play when I can, so those are my special skills outside of the theater. I also love to run, write and play the piano.

Something you’re REALLY bad at: Drawing. I can barely draw a good stick figure.

Current pop culture obsession: I love those ghost hunting shows on the Syfy Channel. I know I’m weird, but I find that stuff fascinating. Last year I even got the chance to spend the night in a reportedly haunted house, which was quite an experience!

Last book you read: Under the Dome by Stephen King

Favorite movie(s): I love movies, so this is an impossible question for me. I have a broad taste in movies, so I’ll just list some of my favorites from different genres: Amadeus; The Green Mile; The Shining; Young Frankenstein; Ferris Bueller’s Day Off; Sunset Boulevard; To Kill a Mockingbird; Up; and anything directed by Alfred Hitchcock, Paul Thomas Anderson or the Coen Brothers.

Favorite musician(s): There are so many musicians out there that I love and respect, but I couldn’t begin to list them all. The name that sticks out in my mind as a personal favorite is Sir Paul McCartney. That man can write songs and tell stories like no other. Just a side note: My dad is one of the biggest Beatles fans on the planet!

Favorite song: I really can’t answer this one. I am a lover of music — all kinds of music. For me, as long as a song tells a great story with a solid melody, then I’m on board.

Favorite play(s): Tough question! Here are some of the ones that come to mind: Doubt, Our Town, Cat on a Hot Tin Roof, To Kill a Mockingbird and Rabbit Hole

Favorite musical(s): It’s a toss-up between The Phantom of the Opera and The Secret Garden.

Favorite actors/actresses: I could watch Daniel Day-Lewis or Meryl Streep in just about anything.

Favorite food: I love a really good cheeseburger. You can’t go wrong there! I could easily tell you where to find the best (and worst) burgers in DFW.

Something most people don’t know about you: I was hit by a car when I was 7. This happened on a father/son campout with my church. I was standing in a field with my friends while one of our counselors was backing up the mini-bus. The bus was pretty far away, so he had to back it up across a considerable distance.

Well, I guess he didn’t realize that there was a group of kids standing in his path, and he backed right into me. I ended up completely under the bus, but thankfully, I wasn’t in the path of the wheels. It was scary at the time, but now it makes for a great party story!

Place in the world you’d most like to visit: Rome or Israel. There’s so much history in those places.

Pre-show warm-up: First I make a cup of hot tea. I then like to walk the stage and the house, vocalizing, drinking my tea and mentally preparing for the performance. After that, I check all of my props and costumes. Then I like to sit onstage to stretch, breathe and continue getting focused.

Favorite part about your current role: I just love getting to sing Stephen Sondheim’s beautiful music. Just wait until you hear this cast sing! Each person in this cast brings something so special to the music. William R. Park and Bruce Greer, our director and music director (respectively), are doing an incredible job of picking apart this score and helping us as we interpret it.

Most embarrassing onstage mishap: While playing the leading role in Pippin at Theatre Three, I had the fortune of working with a cast full of pranksters. During the final performance, someone had strategically placed various inappropriate items at the bottom of my onstage bed. So I cross to the bed and pull the covers back, and a few of these items manage to fall off of the bed onto the stage floor!

While trying desperately not to laugh, I quickly scrambled to pick them up before anyone in the audience could see what they were. I had to focus on keeping my composure for the rest of the performance.

Career you’d have if you weren’t a performer: Any career where I could help people that might need it. I love to help people.

Favorite thing about Dallas-Fort Worth: I love everything about this city. It’s hard for me to put into words what I love about it. There are so many good things happening in Dallas, and there is a special energy in the air here that I haven’t felt anywhere else.

It’s my hometown, and I am so lucky because within my hometown, there’s a community of incredibly talented actors, singers, dancers, musicians, directors, writers, producers and crew members — all lovers of the theater. It really doesn’t get much better than that.

During that show, I faced my fear and apprehension dead on, and I truly am better today because of that journey. In the words of Robert Frost, “Two roads diverged in a wood, and I — I took the one less traveled by, and that has made all the difference.”

A Little Night Music plays from April 18-27 at Pfamily Arts.

Swarner as the disturbed teenager Alan Strang in Equus at Uptown Players. Photo by Mike Morgan