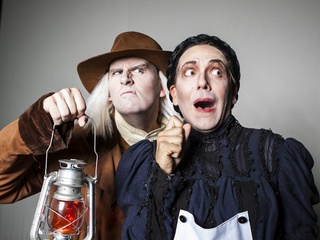 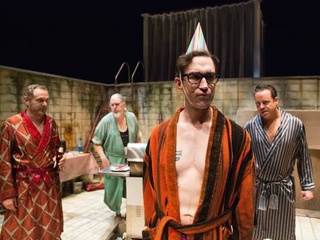 From Penelope, a production by Undermain Theatre, whose artistic director, Katherine Owens, is a member of the TCG conference host committee. Photo by Stan Olszewski

More than 700 theater professionals from across the country descend on Dallas this week for the Theatre Communications Group’s 2013 National Conference. TCG — which defines itself as the national organization for American theater and is the largest independent publisher of dramatic literature (including American Theatre magazine) — is hosting the conference in Dallas for the first time.

“I am thrilled that the DFW theater community has the opportunity to experience the TCG annual conference firsthand, right here in our hometown,” says Terry Martin, producing artistic director at WaterTower Theatre and a member of the host committee. “I have been attending the conference for the last 12 years or so, and I always return home inspired, reenergized and with a new focus on creating the best theater I can.”

“This [conference] will go a long way in opening the eyes of the country as to just how remarkable a community of artists we are,” says WaterTower Theatre producing artistic director Terry Martin.

Katherine Owens, artistic director at Undermain Theatre and also a member of the host committee, says that the conference is a rare opportunity for the American theater community — usually so spread out — to come together in one place and exchange ideas.

“Many members of the Dallas theater community, most of whom have never been to a conference, will have the chance to participate through their memberships in local theater companies, and through a generous number of scholarships made possible by Dallas-area philanthropists and funding organizations,” Owens says. “Many of the artists attending have expressed how excited they are to be included and to meet their colleagues from around the country.”

In addition to days jam-packed with discussion and networking, the evenings offer attendees a chance to unwind and take in the Dallas theater scene. Kitchen Dog Theater offers a benefit performance of its New Works Festival headliner, Se Llama Cristina, on Wednesday night; a special screening of the film adaptation of David Henry Hwang’s Yellow Face is followed by a conversation with the playwright himself.

“I have known for years that the theater we do here in North Texas is some of the strongest in the country,” says Martin. “Unfortunately, I don’t think the rest of the country thinks of us when they think of theater. Holding the conference in Dallas provides us not only the opportunity to share the amazing and diverse work we are doing here, but also the chance to showcase the passion and brilliance of our local artists and leaders through the many networking opportunities. I think this will go a long way in opening the eyes of the country as to just how remarkable a community of artists we are.”

The Theatre Communications Group National Conference (June 5-8) requires registration and is not open to the public. However, the dozens of local theater companies that will benefit from this conference love it when the public shows up to see their shows and generally only ask that you buy a ticket.