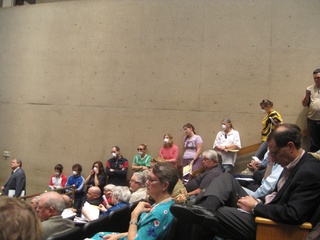 Trinity East Energy wanted to drill on the land it purchased in L.B. Houston Park. Photo courtesy of The Roaming Itinerant

Fort Worth-based Trinity East Energy is suing the City of Dallas for breach of contract and fraud related to the City Council's denial of natural gas drilling permits.

In 2008, Trinity East paid more than $19 million for oil and gas leases on parklands and city property in the Barnett Shale. The lawsuit references "written and oral assurances" from then-city manager Mary Suhm that Trinity East would be allowed to drill in parklands and in the floodplain.

“This is about a deal, plain and simple. We had a deal with the City of Dallas, and they went back on it,” said Trinity East president Stephen Fort.

In August 2013, Dallas City Council denied Trinity East the right to drill on its leased land, citing city code and a task force recommendation against the permits. Four months later, the council approved a 1,500-foot setback from parklands and residential property for all drilling projects, effectively banning the practice in Dallas city limits.

“This is about a deal, plain and simple. We had a deal with the City of Dallas, and they went back on it,” Trinity East president Stephen Fort said in a statement from Androvett Legal Media. “The city made promises to us and took our money. They sold us minerals but then denied us the ability to extract them.”

In the lawsuit, Trinity East says it invested more than $30 million in the project. Total projected losses for the lifetime of the wells exceed several hundred million dollars.

“Facing a $90 million budget shortfall in 2007, city leaders raised much-needed revenue by asking energy companies, including Trinity East, to submit proposals to lease city property and drill for oil and gas,” the statement reads in part.

The lawsuit alleges that Trinity East worked in good faith with city officials to design drilling equipment for use in the floodplain and relied on assurances from Suhm and other staffers in the company's decision to purchase the leases.

Trinity East has filed suit against the City of Dallas concerning its two oil and gas leases of 3,650 acres from the City. During the five and one-half year term of the leases, Trinity East submitted only three applications for zoning permits to drill for oil and gas. Two of the sites were located in a City park and in the floodplain and the third site was close to the City’s new soccer complex.

After conducting public hearings, both the City Plan Commission and the City Council rejected Trinity East’s applications, finding that the proposed locations were inappropriate for drilling and production operations. Trinity East never pursued any other zoning permits to drill within the leased property, nor did it apply for any zoning permits to drill near the leased property so that it could use horizontal drilling techniques to try to obtain oil and gas.

During the time Trinity East had the leases, gas prices became depressed and more became known about geological conditions in the area. Although the City granted several zoning permits for drilling to other companies who requested to drill at more appropriate sites, none of those companies have followed through with actual drilling and production.

Trinity East’s lawsuit lacks merit. The City will vigorously defend its right to exercise its regulatory powers to protect public health and safety as well as the environment.