Family Time
Despite being stuck in the hospital, George H.W. Bush still honors his Christmas tradition 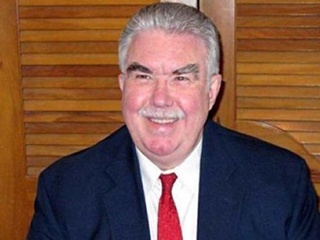 Another Kaufman County law enforcement individual was murdered brutally. District attorney Mike McLelland and his wife, Cynthia Woodward McLelland, were found shot to death in their home on Saturday.

Kaufman County Sheriff's Office spokesman Lt. Justin Lewis confirmed to Fox that the couple was found dead. Their shooting follows the January 31 murder of assistant district attorney Mark Hasse outside the Kaufman County Courthouse. Hasse, a prosecutor, worked for McLellan; no arrests have been made. Kaufman County Crimestoppers has a $100,000 reward for information leading to his killers.

According to the Kaufman Herald, the sheriff's office and Texas Rangers were seeking similarities to Hasse's murder. The Herald also reported that the FBI was comparing Hasse's shooting to that of Tom Clements, the executive director of Colorado prisons who was shot and killed at his home on March 19. The gun used to kill Clements was used in a shoot-out in Decatur, Texas, by Evan Spencer Ebel, 28, a member of a white supremacist gang who was killed by Texas deputies on March 21.

Kaufman County was one of a battalion of agencies that worked on a major bust of 34 members of the Aryan Brotherhood of Texas, who were indicted on federal racketeering charges in October 2012. In December, Texas officials issued a bulletin warning that the Aryan Brotherhood was "actively planning retaliation against law enforcement officials" involved in prosecuting the case.

Neighbors told the Dallas Morning News that they heard loud noises from the McLellands' house on Friday; the front door had been kicked in. WFAA reported that McLellan's body was found in a hallway, perhaps trying to escape, while Cynthia was found in a front room in their house.

McLellan, who was 63, graduated from the University of Texas at Austin and served 23 years in the army, with a stint at Desert Storm. Prior to his 2010 election as DA, he practiced law for 18 years as a criminal defense attorney, mental health judge, and special prosecutor for Family and Protective Services. Cynthia, 65, worked as a psychiatric nurse at Terrell State Hospital. They had five children, two daughters and three sons, one a Dallas police officer.

Anyone with information on the murder of the McLellands or Mark Hasse can contact Crimestoppers at 1-877-TIPSKCC (847-7522).