read all about it
Glam galas, heated lawsuits and a $30 million home: The 5 most popular stories this week 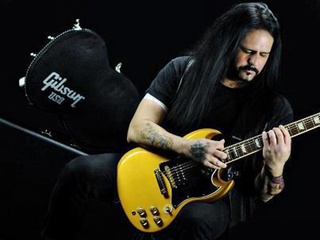 Guitarist Mike Scaccia, who passed away in the early hours on December 23, 2012. Photo courtesy of Omar Mena Photography 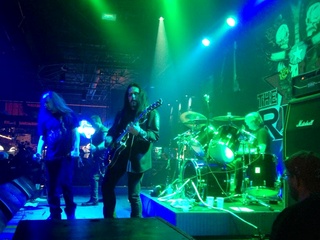 Rigor Mortis' final show at the Rail Club in Fort Worth on December 22. Photo courtesy of Susan Roden Photography

Dallas musician Mike Scaccia, who achieved national acclaim as guitarist for metal-rock bands such as Ministry, the Skatenigs and Rigor Mortis, died on Saturday during a performance at the Rail Club in Fort Worth. He was 47.

Fans saw Scaccia collapse in a seizure while onstage during a Rigor Mortis show, from what was reported by some friends to be a heart attack. He was taken to the hospital but did not recover.

Susan Roden, a friend, saw him in the green room right before the band went onstage. "He was in great spirits. I know that," she said.

One witness posted on Facebook that Scaccia fell in the middle of a solo.

Rigor Mortis played at 11 pm, as part of a long-anticipated show that included Maleficus, Embalmed and Rabid Flesh Eaters.

The band formed in 1983 in Arlington as a three-piece with Scaccia on guitar, Casey Orr on bass and Harden Harrison on drums; singer Bruce Corbitt joined the band in 1986. Their self-titled debut was released by Capitol Records record in 1988, followed by 1989's Freaks and 1991's Rigor Mortis vs. The Earth.

Scaccia rose to national prominence in 1989 when he joined industrial metal band Ministry on their "The Mind is a Terrible Thing to Taste" tour. He played on Ministry's platinum-selling album Psalm 69 and the '95 release Filth Pig, and he joined Ministry on the 1992 tour of Lollapalooza.

Scaccia also played with other industrial metal bands such as Revolting Cocks and Lard, and on solo releases by Ministry founder Al Jourgensen. In March 2012, the two recorded a new Ministry album called Relapse.

Despite his fame, he remained generous and down-to-earth, said drummer Andre Avelar, who played with Scaccia in a band called League of Blind Women.

"He was a shining example of what you would like to hope that fame brings, in that he remained true to his roots and was kind even to those he knew only moderately," Avelar said. "He had his demons over the years, including some drug use [Scaccia and Jourgensen were arrested in 1995 for possession of heroin], but no one ever had a bad word to say about Mike Scaccia."

In August 2012, the original Rigor Mortis lineup reunited and had been working on a new album, Slaves to the Grave.

"You will be greatly missed by the metal world and especially those of us who grew up within the DFW local metal scene (80s-90s). We have lost another legend from our metal family waaay too soon and you will always be remembered as one of the greats!"

In Scaccia's last update, he said, "These next 2 shows is what I worked my whole life for... Look out Mother Fuckers...hahha"

Chris Kelly, singer for League of Blind Women, said that he and Scaccia had talked about the similarly untimely death of "Dimebag" Darrell Abbott, guitarist for Arlington metal band Pantera, who was shot and killed while onstage in a club in Ohio in December 2004.

UPDATE: According to the Star-Telegram, police responded to a call from the club at 11:45 pm, and Sciacca was pronounced dead at 12:26 am in the emergency room at Texas Health Harris Methodist Hospital Fort Worth.

Guitarist Mike Scaccia, who passed away in the early hours on December 23, 2012. Photo courtesy of Omar Mena Photography