Highland Park Presbyterian Church was founded in 1926. The building's current value is $30 million. Photo via Facebook 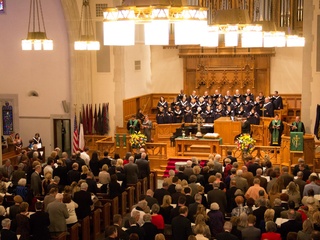 Highland Park Presbyterian Church has 4,000 members and is one of the largest such churches in America. Photo via Facebook

Highland Park Presbyterian Church has agreed to pay $7.8 million in order to settle a lawsuit related to competing claims on the church's 88-year-old property.

After leaving the national Presbyterian denomination, HPPC had sued Grace Presbytery, the regional affiliate of Presbyterian Church, in order to retain control of its Park Cities property. Several previous attempts at mediation had failed, and a jury trial was set for October 2014. However, the pious parties finally reached an agreement on September 8.

In exchange for a one-time $7.8 million payment, Grace Presbytery will release all claims on the HPPC property, which the Presbyterian Church of the United States had previously said it owned as part of an "irrevocable express trust."

The historic church itself was valued at $30 million, and HPPC estimates the total value of the McFarlin and University boulevard property at around $70 million (representatives from Grace Presbytery dispute this figure). HPPC said that the only financial assistance the Presbyterian Church has ever provided was a $7,500 check in 1927 to assist with the property's down payment.

HPPC senior pastor Bryan Dunagan announced the settlement in a video on the church's website. "We believe that it would not be a good witness to the community of Dallas to allow this litigation to run its course in the court system. Moving forward with a prolonged court battle would jeopardize our mission, our outreach efforts and our ongoing ministry for years to come," Dunagan said.

In a statement, Rev. Janet DeVries of Grace Presbytery praised the resolution. "We give thanks to God for this moment and trust that this settlement serves as a witness across the PC(USA) that the trust clause is an integral part of our constitution and will be taken seriously by Grace Presbytery. We are pleased to have been able to mediate this situation and avoid a court trial."

Highland Park Presbyterian Church was founded in 1926. The building's current value is $30 million. Photo via Facebook