Judge Judy
Case against Candy Evans, Laura Wilson and WFAA gets nuttier thanks to power-hungry judge

Scientology house in East Dallas burns down uninsured and neglected 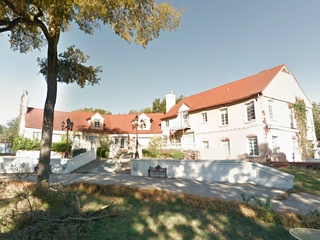 Once owned by the Church of Scientology, the mansion at 9401 Buckner Blvd. is no more. Photo by Google Maps

The 10,021-square-foot house burned in a three-alarm fire October 3. Candysdirt.com

An unfortunate fire claimed the so-called "Scientology house" at 9401 Dixie Ln. off Buckner Boulevard in Dallas on October 3. The 10,021-square-foot house burned down in a three-alarm fire, with 17 fire trucks that were unable to save it. By nightfall, the house was bulldozed, according to real estate agent and neighbor Vicki White.

The most surprising thing about the fire is the fact that owner David Anderson did not have insurance on the house — dispelling rumors that the fire was set for insurance money.

"He did pay cash for that house, and you don't need to have insurance unless you have a lien," White says. "I've seen some comments online speculating that the fire was set deliberately for an insurance claim. That should put it to rest."

House collector David Anderson bought the house in 2009, and it sat empty ever since.

How this mansion could simply burn down is the final chapter in a sad history of a dwelling that, in its current form, sat vacant and neglected.

But like many hoarders, acquisitions become a problem when an owner owns too many things and doesn't do maintenance. "You do gotta take care of them," Evans says.

Troubled history
The Dixie Lane property's troubles began in its days as a party mansion for former car dealer Al Morgan. He took the former 1940s home and transformed it into a pink stucco, Vegas-style residence with hot tub and mirrored columns — updates that stuck out like a sore thumb in its middle-class environs.

"It was such an anomaly — a big, oversized mansion that was totally out of place in that neighborhood," White says. "If you put a 10,000-square-foot house like that in Forest Hills or Gaston Road or Preston Hollow, you've got a multimillion-dollar house. But anybody who would spend big money on a house would probably not buy in an area like that where they're surrounded by $100,000 homes."

Morgan sold the mansion to the Church of Scientology in 2000, who used it as a "celebrity center" until 2008. Anderson bought the property in 2009 with the intent of converting it into a bed-and-breakfast or a wedding facility.

And then it sat. It didn't even have the gas or electricity turned on, White says.

"He has had the police out numerous times this year because of vandals that have broken in," White says. "They wrote all over the walls, knocked down chandeliers, tearing it up, just meanness. And he did have some professional thieves who broke in. He had some things stored there that had some value."

White says that the house has been a target for school-age kids. "[Anderson] has found in the past little homemade torches; he's seen paper rolled up and carpet burns." She says he was "getting ready" to install a fence in the back driveway to keep people out.

An eyesore
The neglect did not go unnoticed by neighbors, who lament Anderson's tendency to acquire a property and then let it decay. A discussion group on one neighborhood organization site shares tales of his defaults, including his purchase of the famed Bella Nora mansion, which he bought to please his teenage daughter.

"I live in that 'hood," says one commenter. "Somebody needs to do a 'one-year-later' story ... to find out what happens when a hoarder with a lot of money buys a property like this. Ask anyone in Forest Hills."

"He owns several houses in Forest Hills that remain unoccupied. Does not try to sell or rent," says another. "The reason that he buys all these properties is the real question."

"Who knows, but he creates quite an eyesore for the rest of us, and it certainly doesn't help with our property values," says a third.

"Frankly, I've never heard of a home not being insured. It's devastating and sad," she says. "We can disagree on our opinions of that home, but I think it was meaningful, an architecturally significant home. At the end of the day, it had value."

Once owned by the Church of Scientology, the mansion at 9401 Buckner Blvd. is no more. Photo by Google Maps