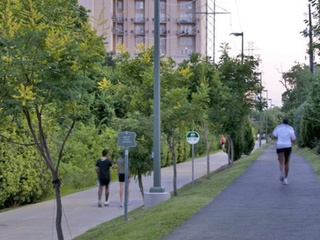 Unhappy about a seven-story, multi-family apartment complex planned along the Katy Trail, the Town of Highland Park has filed a petition in a Dallas County court asking for an injunction to prevent it from moving forward.

The property is located at 4719 Cole Ave., which lies directly on the Katy Trail and within 200 feet of Highland Park, Abbott Park and several Highland Park residential properties. In August, the Dallas City Council changed the zoning restrictions to allow an increase in the height from 36 feet to 82 feet, and the number of units from 78 to 258.

According to the petition, the property is not compatible with the surrounding area; no buildings in the neighborhood exceed 36 feet in height. Aside from the quality of life, Highland Park does not want to set a precedent for high-rise development all along the Katy Trail.

In a release, Highland Park Mayor Joel Williams said that the combination of Katy Trail and Abbott Park make it a one-of-a-kind neighborhood. "A seven-story, multi-family, high-rise building does not fit this neighborhood and violates Dallas' own master plan," he said.

Dallas' Comprehensive Plan was created from citizen and business input in 2006 to provide a framework for economic development balanced with neighborhood preservation. Under §211.004 of the Texas Local Government Code, the plan must be amended by the Dallas City Council before any deviance from the plan's zoning restrictions can be considered.

Dallas city staff rejected the changes in zoning restrictions in May, saying the "proposed increase in height and density is not compatible with the surrounding neighborhood because the scale of the proposed development is not consistent with the surrounding development." But the Dallas City Council ignored the city staff's recommendation and went ahead and approved the 133 percent increase in the size and density of the proposed redevelopment project.

The Town of Highland Park is seeking relief and recovery of all legal costs.