Caffe Bene in Carrollton does waffles and coffee with international flair

Caffe Bene does waffles and coffee with international flair 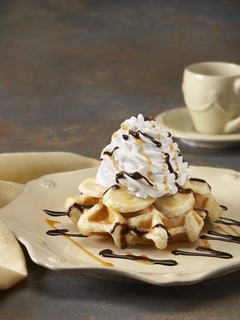 Caffe Bene, a large coffeehouse chain founded in 2008 in Seoul, South Korea, has opened one of the few stateside branches in our very own Carrollton, on Trinity Mills Road.

The chain, which has 700-plus locations in Korea, debuted in America in February 2012, when it opened a branch in Times Square. It now has nine cafes in New York, New Jersey and California – and one in Carrollton, which opened in November. Go Texas.

The chain does coffee drinks, waffles, pastries, sandwiches, parfaits and gelato. Tea is high-end Mighty Leaf, and there are nearly a dozen gelato flavors made onsite. The specialty is a grain drink called Misugaru, with brown rice and barley, described by some as having an oatmeal/peanut butter smoothie flavor.

Waffles come in a sweet version, as you might expect, topped with strawberries and chocolate syrup. But Caffe Bene also does savory waffles too, wherein they become an entrée, topped with ingredients like egg salad and arugula. Somewhere in between is the waffle topped with ricotta cheese, figs and almond.

They also come with other ingredients mixed into the waffle itself, like Parmesan cheese, or in novel flavors such as red velvet cake. There is a red velvet cake latte too.

Dessert blogger Confections Confessions differentiates the waffles as Liege waffles, which are denser and smaller than the usual Belgian waffles. (Fruitealicious, also in Carrollton, has Leige-style waffles as well.)

Another popular Caffe Bene signature is the hearty dessert-breakfast item called the honey toast, like a French toast but made with impossibly thick slices of bread, drizzled with honey and toppings such as bananas and walnuts.

Each branch has its own signature decor. In New York, that means brick and chandeliers; in Los Angeles, it's a sprawling mural. In Carrollton, it's gray cement walls and a beautiful planked-wood ceiling, with clean, warm-toned wood furniture. At the end of the store is a gorgeous oversized clock.

A staffer at the Carrollton store said that they chose the area because of the large Korean population, and they were considering other branches in Texas.