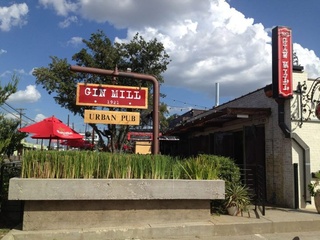 Gin Mill on Henderson Aveneue will not reopen. Courtesy photo

While Dallas diners are enjoying lots of prosperous restaurant openings, we're also suffering shut-downs — and not just Potato Flats at Trinity Groves. We'll minimize the pain by wrapping them up in one tear-stained roundup, as follows:

Bohemian Cafe, the kolache shop on Greenville Avenue, closed in June following a dispute with the landlord. The space has been a longtime revolving door for independently owned restaurants, such as Jack's Southern Comfort Cafe. Bohemian owner Jason Horne was the latest; he lasted there for just under a year.

"We closed it down so we can focus on our new location opening at the Dallas Farmers Market and our wholesale operation, which is doing very well," he says. The opening date for the farmers market operation is currently targeted for the fall.

With Greenville Avenue thriving, the location seems likely to have an unsuspecting replacement shortly; Horne said he'd seen potential tenants come and look at the space during the last few weeks he was open. Meanwhile, customers can buy Bohemian's kolaches at Opening Bell, the coffee shop in South Side at Lamar.

Gin Mill, the pub on Henderson Avenue, has closed due to "coding issues." Owners Peter and Cheryl Kenny initially shut down in May on a temporary basis. But after grinding through a month-long cycle of uncertainty with the City of Dallas, the couple, who also own Capitol Pub and the Dubliner, decided they had to make the closure permanent.

The Gin Mill had been open for four years when the city suddenly began to raise issues about the building.

"I'd love to explain what happened but we don't even know ourselves," Cheryl says. "For four years, we complied with everything, and when the city first approached us, we thought it was a mistake."

Many attorney hours and meetings later, they're still unsure what changed about their situation but recognized that starting the process over would have put them under.

"It was a difficult decision to come to because we had staff that still wanted to work for us, but we couldn't keep those people hanging," she says. "The great thing is, most of our people have found work."

Also on Greenville Avenue, Woodfire Kirby's closed on July 11. The restaurant described itself as "chef-driven" and specialized in hickory wood-grilled cuisine. A spokesman said that a statement about plans for the concept and location would be coming later this week.

The company also owns Kirby's Steakhouse in Southlake, San Antonio and Houston, as well as Nickel & Rye in Uptown Dallas.