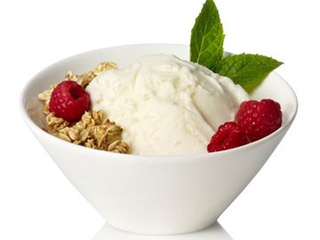 A novel ice cream concept from Chicago that uses newfangled liquid nitrogen is coming to Texas. iCream Cafe will open October 5 on Dallas Parkway in Frisco, where customers can get their ice cream made to order.

The concept is from business-school graduates Cora Shaw and Jason McKinney, who devised a system using a liquid nitrogen machine. It instantly freezes ice cream, frozen yogurt, sorbet, hot pudding or shake into a uniquely smooth and creamy dessert.

In 2009, they opened their first iCream Cafe in Chicago’s Wicker Park area. They've been featured on Food Network's Kid In A Candy Store, among other shows.

The ice cream-making process begins by first choosing a base liquid. Next is the flavor combination and color. Finally, the mixture is injected with liquid nitrogen and mixed with candy or fresh fruit. Due to the rapid freezing process, a frozen dessert is served within minutes of placing an order.

The Frisco branch is the fourth, after Chicago, Kuwait City and Dubai. Heidi Ackerman will open iCream Cafe in Frisco.

"iCream is for the choco-holic 'load-it-on-and-give-me-all-the-calories-you-got' customer, as well as the more discerning 'I need a light sorbet or nonfat yogurt customer,'" said Ackerman in a release.

Bluffview: A bucolic hideaway that offers convenience with its beauty
The Fairway: University Park’s close-knit community where neighbors feel like family
Plano: Pair of top agents spreads the word about this family-friendly area