Margarita-focused Dallas restaurant likes it a little hot and juicy

Margarita-focused Dallas restaurant likes it a little hot and juicy 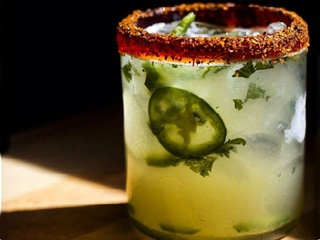 In this episode of Margarita Mission, host Emily Reppert has her sights set on Urban Taco, "the margarita king," according to Teresa Gubbins, in our roundup of the best margaritas for discerning Dallas cocktail drinkers.

The Mexican mini-chain, with locations in Mockingbird Station and Uptown, serves eight exotic fruit-flavored frozens, such as pomegranate and guanabana, plus nine on the rocks with various muddled ingredients. The signature is the ginger-jalapeño, featuring tequila in which they've marinated fresh ginger and lemongrass. After adding lime juice and agave nectar, they muddle jalapeño slices and cilantro leaves, resulting in a well-rounded drink that's spicy but not too hot.

Urban Taco manager Ricardo Alcala credits fresh squeezed juice for the success of the restaurant's beverage program. And they squeeze a lot. "We squeeze about three gallons of lime juice every day," he admits.

As for the ginger-jalapeño margarita, he has this to say. "The sweet of the agave, the lime, the mix of all those ingredients just give you a really, really good flavor. It will make you ask for another one."