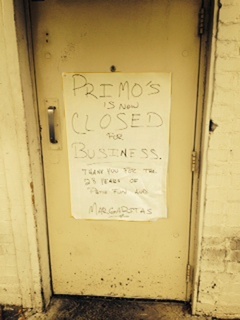 After presiding from its patio perch over McKinney Avenue for 28 years, the original Uptown branch of Primo's closed abruptly on December 20. Calls to the restaurant went unanswered, but an employee at the Garland location confirmed the closure.

"It's a really big deal, but I'm not sure I can talk about it," she said. "There's a chance they might reopen but probably not."

Employees at the Uptown location discovered locked doors when they reported to work on Friday. A hand-written sign posted on the restaurant's back door read, "Primo's is now closed for business. Thank you for the 28 years of patio fun and margaritas."

Although the restaurant gave no hint it was closing, it did stop posting updates on Facebook and Twitter on December 13.

Primo's opened in November 1986 as an early settler of Uptown. By the '90s, its convenient location and late hours made it a popular after-hours chef hangout, especially from the nearby Mansion on Turtle Creek and Hotel Crescent Court. It proudly celebrated its role as the place where chef Dean Fearing met former wife Lynae.

By 2008, it had sunk in stature to a place known best for its cheap, watered-down margaritas. In 2009, owner Eddie Cervantes sold it to Phil Lacerte and Frank Bonilla, a pair of entrepreneurs without much experience in the restaurant industry.

In March 2013, the owners were served with a lawsuit by BMI for airing music without paying royalty fees. The restaurant was also the target of a break-in in August.

The timing of the closure puzzled staffers at neighboring restaurants. "It doesn't seem like it would be a landlord issue," said one server at a nearby spot. "I can see if it was December 31, maybe, but not December 20. And not right before the holiday."

Patio at Primo's was one of its most alluring traits. Photo courtesy of Primo's