A Shell of a Man
Hollow hunk: Matthew McConaughey takes his Oscar bid too far with crazy weight loss

Listen up: 7 underrated live-music venues in Dallas-Fort Worth

Listen up: 7 underrated live-music venues in Dallas-Fort Worth 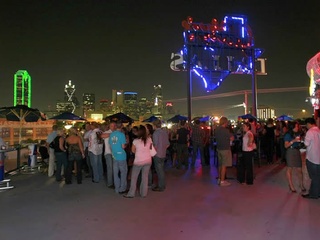 The Loft is often overshadowed by Gilley's and Palladium Ballroom. Courtesy of Gilley's Dallas

For whatever reason, there are a lot of places to see live music in Dallas that are misjudged, miscategorized or simply misunderstood. Maybe it’s a lopsided Yelp review. Or perhaps it’s been labeled a “a bar with a stage.” Then there’s the old excuse, “That place only does (insert particular music genre here).”

We say it’s time to stop splitting hairs and start acknowledging these joints. These seven venues are just plain good for getting your live-music fix.

The Loft
Wedged between two much more high-profile venues, Palladium Ballroom and its sister party room, Gilley’s, the oft-overlooked Loft is a more intimate space. It has been rigged for everything from weddings to beer-hurling, old-school mosh pits that churn while The Buzzcocks play an entire album set. The deck has a great view of downtown, the bartenders are quick and there’s doable bar food downstairs.

The Curtain Club
It sucks to be pigeonholed. Typecasting doesn’t only affect actors like George Reeves and Shia LeBouf; it also affects clubs that historically have relied on one genre. In the case of Curtain Club, that’s heavy acts like Drowning Pool and Slow Roosevelt. Truth is, the well-laid-out Curtain Club is one of the best live-music venues in Texas, and this place is open to all kinds of music. One recent other-than-metal example: the “Ghost of Blind Lemon” assembly of bands, an ode to the gone-but-not-forgotten venue that used to be across the street.

Lola’s Saloon
In Fort Worth, this is a pretty heralded spot. But if you’re looking at it through a Dallas lens, it seems like a normal bar with an average stage and an Old West-style rear deck. But have another beverage and stick around past 10 pm to witness the transformation. Local promoters have piped in some great national touring acts who could have played a place with more square feet but far less personality. Even the college kids in here seem more laid-back than most, well, college kids at a bar do. It’s one of the biggest little venues in Texas.

El Sibil
It might not hold a liquor license or a typical schedule of shows. (Monthly is the norm.) But considering the vibe, great lighting and decent acoustics, those are but minor flaws for what is a very, very special place to see live music. The creative epicenter of video whiz Jason Whitbeck and crew’s YesGo Productions, El Sibl is part video studio, part house party and part happy accident. Experience it at least once in your local music travels – if not sib-eral times. (Sorry. We had to.)

Cambridge Room
Like The Loft in the Gilley’s complex, the Cambridge Room gets overshadowed by its big brother, the House of Blues main stage. But the Cambridge Room has got it where it counts: a big, solid-wood, general-admission floor; above-average acoustics; a stage at one end; and a big bar at the other. If you must, there are seats flanking each side. (Wuss!) We remember an especially great night in this room when Black Joe Lewis and the Honeybears opened for the New York Dolls in 2009.

The Foundry
It’s not the easiest spot to find. But it’s worth whipping out your smartphone navigation to get across the bridge and into the industrial section of Oak Cliff. Why this open-air fest is downplayed as a live-music venue (and cast as a patio bar attached to a hell of a family restaurant called Chicken Scratch) is beyond us music geeks. With gravel under your feet, picnic tables galore, a mile-long list of beers and plenty of diversity on stage – from electronic and avant-garde duos to indie-rock acts from Austin – this isn’t the first time someone has written that The Foundry begs to be a legit live-music venue.

The Boiler Room
Similar to its Deep Ellum neighbor the Curtain Club, the Boiler Room (albeit a newcomer to the neighborhood) is typecast as a rock bar. (It doesn’t help that one of the owners is a member of Drowning Pool.) Truth is, this place is down for whatever, and while the Boiler Room does end up booking a lot of rock, it’s not so unusual to find DJs and dancing or other types of crowds. The lounge side is cozy and plastered with big screens, and the burgers are mighty fine. On the live side of the Boiler Room is some top-notch PA, and it’s a fairly spacious stage for a place this size.