Watch the party unfold at the 2014 CultureMap Stylemaker Awards

Watch the party unfold at the 2014 CultureMap Stylemaker Awards 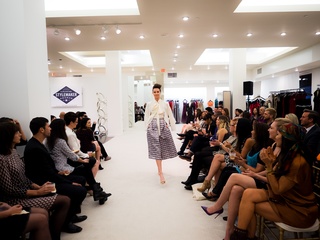 A runway look from the 2014 CultureMap Stylemaker Awards party at Tootsies. Photo by Hoyoung Lee

On October 15, the six finalists in our first-ever CultureMap Stylemaker Awards put their skills to the test for a fun fashion show at Tootsies at the Plaza at Preston Center. Prior to the presentation, attendees sipped cocktails from Herradura and Woodford Reserve; snacked on bites from Plaza restaurants such as R+D Kitchen, Taco Diner and Sprinkles; got sketches made by artist Ben Vincent; and posed for pics in the Longhorn Photo Booth.

But that was only the warm-up for the real party, which took place upstairs, when finalists Matt Alexander, David Goltl, Jenny Kirtland, Kevin Lavelle, Melissa Rountree and Maleiah Rogers presented their two looks — cocktail and Sunday brunch — which they pulled together using pieces from Plaza retailers.

Based on what they saw on the runway, judges Diana Oates, Cynthia Smoot, Yvonne Crum, Jackson, Stephanie Quadri and yours truly selected an editors’ choice winner.

Rountree, a Realtor with Dave-Perry Miller, already had the readers’ choice title locked; she received the most votes during the online poll. Rogers, the owner of Era Salon, won editors’ choice. And Goltl, studio proprietor at Design Within Reach, was honored for incorporating the most Plaza stores — including Pockets, Mal Malouf, Riffraff, Tootsies, Occhiali Modern Optics and Bachendorf’s — into his looks.

In this video, narrated by Oates, we go behind the scenes at the party and chat with our CultureMap Stylemaker finalists about their inspiration.