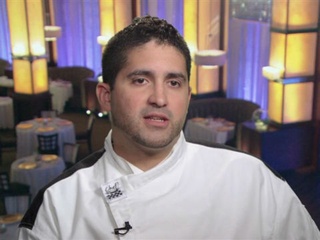 Agave Azul is opening a branch in downtown Dallas in March 2015. Photo via Google Maps

Downtown Dallas got exciting news in early December with the plans for a second branch of Agave Azul, the highly rated Mex/Tex-Mex concept from restaurateur Zotico Reyes. Now there's official word of the chef: Sebastian Royo, a 2013 Hell's Kitchen contestant with wide-ranging kitchen experience in the New York restaurant scene.

Royo came on board in 2014 and has been "incubating" at the Flower Mound branch of Agave Azul, which Reyes just closed at the end of December.

"We knew that with our first branch in Dallas, we had to elevate our food," says owner Zotico Reyes.

"We've done well in Carrollton and Flower Mound, but we've never had a true chef," Reyes says. "But we knew that with our first branch in Dallas, we had to elevate our food, especially with competitors around the corner like Wild Salsa and Iron Cactus. We wanted to make it more of a chef-driven menu."

Named after the blue agave tequila plant, Agave Azul is known for its selection of more than 200 tequilas and its traditional Mexican cuisine. The downtown Dallas branch will open on the ground floor of the new Lone Star Gas Lofts, being renovated by developer Ted Hamilton.

Downtown's Mexican restaurant lineup includes Wild Salsa, Iron Cactus and Sol Irlandes. But there are few restaurants, Mexican or otherwise, on this southeastern edge of downtown not far from the Farmers Market, where the Lone Star Gas complex sits.

Reyes interviewed various chefs from around the country before finding the perfect fit with Royo; his Facebook page shows an appetizing assortment of dishes ranging from shrimp tacos to cheesecake topped with peanut brittle.

"Sebastian worked with chef Aaron Sanchez in New York, with restaurateur Danny Meyers, and Thomas Keller's Per Se," Reyes says. "He's worked at a lot of great restaurants but never made it to executive chef. So this was a win-win."

Royo went to college in El Paso and has family in Texas, so that's added incentive.

Reyes says they used the Flower Mound location as a place to test dishes. "Sebastian rolled out a new menu, with ahi tuna tacos, we just let him have at it," Reyes says. "We used it as an incubator for Dallas."

When the lease in Flower Mound was up at the end of December, the time seemed right to move on.

"Five years there was a good run, and Carrollton is still open," Reyes says. The target opening for downtown is the first week of March.