Cookies and milk could upstage beer at now-open BrainDead Brewing 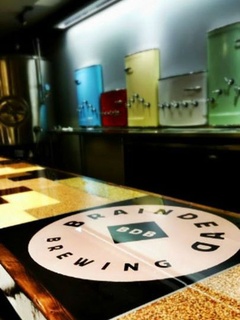 In Dallas' biggest beer news since the advent of the crowler, March 3 marks the opening of BrainDead Brewing, the new brewery-brewpub in Deep Ellum.

BrainDead is the craft beer project from Sam Wynne, Jeff Fryman, brewer Andrew Huerter and chef David Pena that's been in the works for more than a year. The quartet hosted a series of friends-and-family events over the weekend that welcomed just every food-and-beverage professional in town.

They're featuring 42 taps, a dozen of which are their own beers made onsite. Patrons can also take beer to-go in growlers, although BrainDead has yet to start brewing. As for the food, Pena calls his menu "eclectic but cohesive."

One talker on the menu is the cookies and milk. Chef David Pena adds brewers' oats to his cookie dough, and the milk is a warm chocolate milk made with chocolate syrup, cream and stout beer.

"I wanted to make sure there was a little something for everyone, from vegan and vegetarian to straight-up from Texas," he says. (Guess that means meat.)

Starters include chili with brisket, housemade chicharrones, queso in "regular" (with meat) and "veggie" (though not vegan). There are Brussels sprouts with queso, chips and salsa, roasted cauliflower, and a charcuterie board.

Salads include one with fish and another with "drunken" steak. Among the sandwiches are a burger, Cajun-smoked turkey and beer-brined chicken. A quartet of entrées includes mussels, a pork chop and smoked turkey leg.

Pena says that other than the breads, which they get from Village Baking Co., he makes everything in-house. He also has two fryers, one "vegetarian" and one not.

His burger is a blend of brisket, Kobe beef and house-made bacon, topped with a stout mustard, tomato, bibb lettuce, fried shallots and cheddar-onion jam. But the dish that he says "everybody is crazy for" is the chili.

"We competed in a chili cook-off recently at Luck at Trinity Groves and won," he says. "It's brisket chili that I make in my grandfather's 50-year-old cast iron pot, so it gets a nice beautiful char. I simmer it for four hours and serve it in cast iron skillet garnished with Fritos."

His roasted cauliflower appetizer is broiled without oil — "so that it gets hot spots," he says — then tossed in a honey-curry vinaigrette with Parmesan cheese. If they have a signature dish, it's the pork shop, brined in beer, then smoked, then grilled to order and painted with chipotle barbecue sauce. It comes with collard greens and poblano queso cornbread.

There are two desserts, including a glorified "millionaire pie" with cream cheese, grilled pineapple and pecans on a graham-cracker crust. But the talker is the cookies with milk. He adds brewers' oats to his cookie dough, which he says gives the baked cookie an uneven texture that's light and fluffy yet crumbles easily. The milk is a warm chocolate milk made with chocolate syrup, cream and stout beer.

"You dip the cookies in milk so that whatever falls off goes into the milk, and you get that cookie milk experience from when you were a child," he says.

BrainDead is open Monday-Wednesday, 11 am-midnight; Thursday-Saturday, 11 am-2 am; and Sunday, noon-midnight.