Scotch & Sausage will give Dallas night owls something meaty to chew 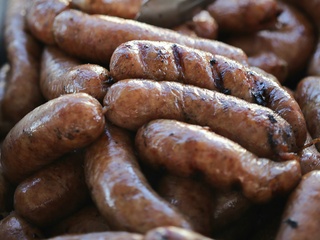 If you're someone who craves sausage late at night, then you can soon fill those desires at Scotch & Sausage. Opening soon in the Cedar Springs area, the restaurant specializes in sausage sandwiches, along with Scotch and whiskey, served until the wee hours.

The restaurant is going into a prized location at 2808 Oak Lawn Ave., in what was previously an attorney's office. Owner Dylan Elchami, a young entrepreneur with experience in the construction business, spent nearly a year renovating the location. He hopes to open by June.

"I went way too crazy, but this building had my name on it," Elchami says. "I saw what kind of atmosphere it could have. And coming from construction background, I knew I was the only person who do it."

Elchami's family does construction of restaurants such as Texas de Brazil, so he knew what it meant to build a kitchen from scratch. He poured a new slab for the entire building and built bathrooms, dining rooms and a patio.

"The only reason we didn't just knock it all down is that the building was grandfathered on Oak Lawn," he says. "If you wipe down a building, you can’t put a new one up. So I took a beat-up diamond and made it shine again."

Scotch & Sausage will be a community beer garden and grill with Scotch and whiskey. Influenced by traditional German biergartens, the menu will feature sausage sandwiches, Belgian fries with homemade dipping sauces, imported beer and "gourmet" sodas.

"We'll do about 20 kinds of sausage, everything from bison to chicken with apple to vegetarian sausages," Elchami says. "Whatever we do will be of the highest quality, with prime cuts, from organic and local when we can. We're nailing all those cues."

Elchami was inspired by a similar concept he saw in Los Angeles called Wurstkuche, which has an identical menu of sausage sandwiches, Belgian fries with dipping sauces, imported beers on tap and gourmet sodas. "I thought the idea of a place doing sausage and beer made sense here," he says.

He hopes it will appeal to everyone, from the guy in the business suit to the family with kids. But he's paying particular attention to night owls like himself, who like to eat late but can't find anything open.

"I'm a late-night guy. I don't eat dinner until 8 pm, sometimes 10:30 pm," he says. "That's a big reason for me doing this. Everything shuts down. Velvet Taco, if you go there late at night, the line is out the door.

"Our city has more young people, especially around Uptown. I felt like there was a void that needed to be filled."