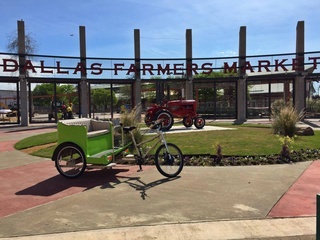 In exciting Dallas Farmers Market restaurant news, the vegetable-centric Mudhen, opening this summer, now has a chef: Jennifer "Suki" Otsuki, currently in residence at sibling restaurant Lark on the Park.

The restaurant is at the north corner of the Dallas Farmers Market, where it will feature a healthful, chef-driven menu highlighting produce procured from growers located 200 feet away from its kitchen. The restaurant also will have a patio and beer garden, with craft beers from around the world.

This is the first lead position for Otsuki, who has worked at restaurants such as Meddlesome Moth — where she was a sous chef under opening chef Chad Kelley — and House of Blues.

"The idea was for me to spend time at Lark on the Park, where I've been working with chefs Melody Bishop and Dennis Kelley," Otsuki says. "I love the farm-to-table, food-driven, produce-driven spirit of Mudhen, with a big focus on healthy eating. It's healthful but it's not diet food. That's my passion."

The Mudhean team has taken a couple of research trips to New York and Austin, and they consulted with nutritionists and farmers to make sure what they're doing with the menu is on track.

"I've been playing around with making sauerkrauts and pickling, because there'll be a big grab-and-go area with jams and market-type items," Otsuki says. "A huge portion of the menu will be 'create your own,' where you can combine things from a list of options daily that we can prepare in different interesting ways."

Wynne says the menu won't be gluten-free, because they'll have bread, and it won't be vegan.

"It'll be up to you to pick and choose what fits your diet. If you want to eat like there's no tomorrow, you can do that too. The only thing you won't be able to get much of is sugar or empty carbs."